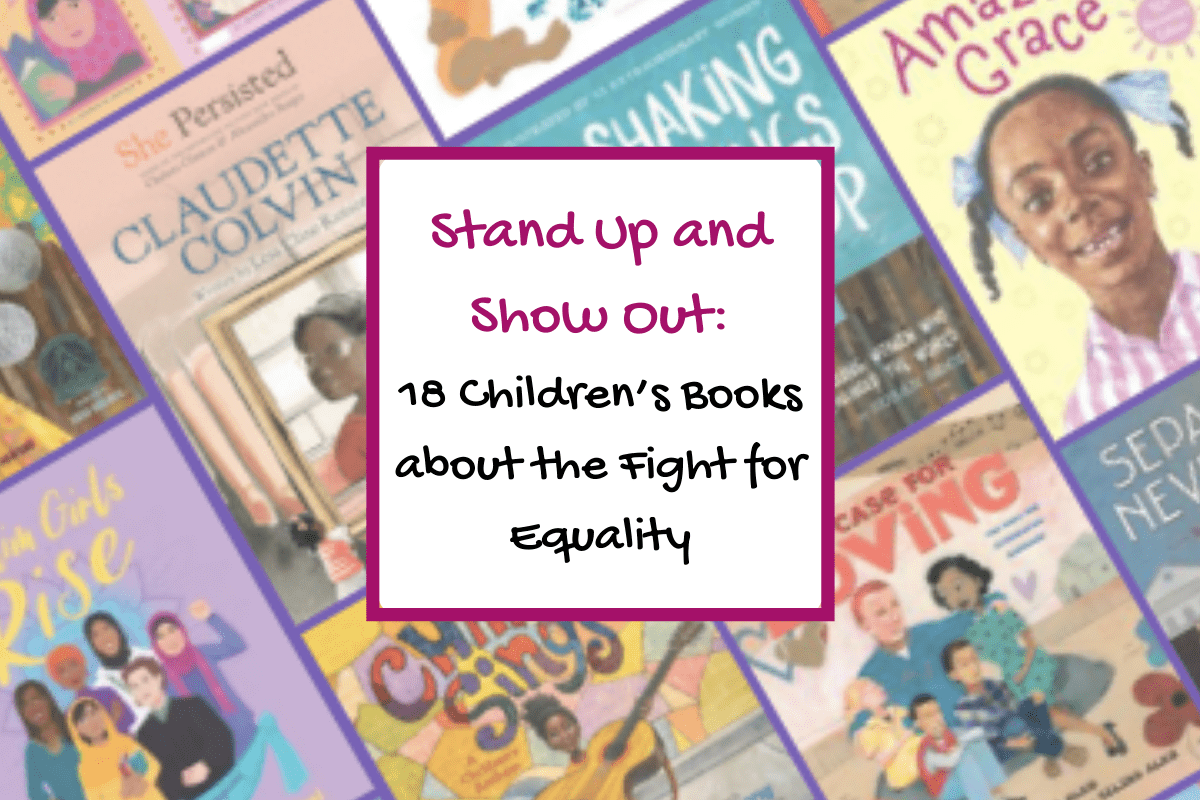 As parents, we take the job of protecting our children very seriously.  We wish we can shield them from all of the world’s injustices-push the uglies of the world into that dark closet with all the things that go bump in the night.  As well-intentioned as this might be, the beautiful world that we want our kids to thrive in can only exist through our actions.

Our ability to show and discuss the inequalities in the world helps our children understand how different people are affected by them.  Understanding the past and present provides an opportunity to understand where we’ve been, appreciate the privileges we experience today, and imagine a more equitable world for the future.

These 18 books provide a few entryways into the struggles for equality and some of the bold and brave people that fought for the rights we have today. 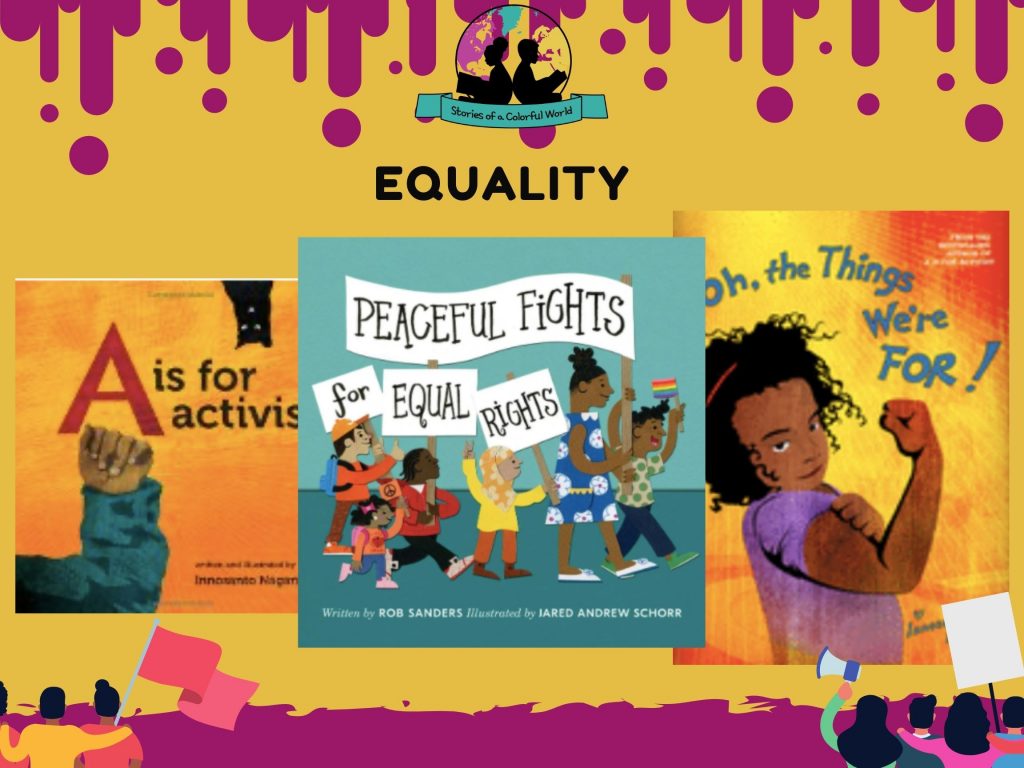 A is for Activist by Innosanto Nagara (Ages 3-7): It’s never too early to start sparking those conversations about equality and doing your part in making the world a better place.  In this ABC book, kids learn so many ways to use their voice to fight for equality.

Peaceful Fights for Equal Rights by Rob Sanders, Jared Andrew Schorr  (Ages 4-8): There is not just one way to fight for justice.  This book shows dozens of ways that each of us can play a part in fighting for equal rights.  ***Pick of the Month***

Oh, the Things We’re For by Innosanto Nagara (Ages 6-9): In a style reminiscent of Dr. Suess, he uses rhyme to encourage kids to think about the world they envision for the future.  From health care to climate change and education and living wages, there are enough causes for any of us to find our place and voice within the movement. 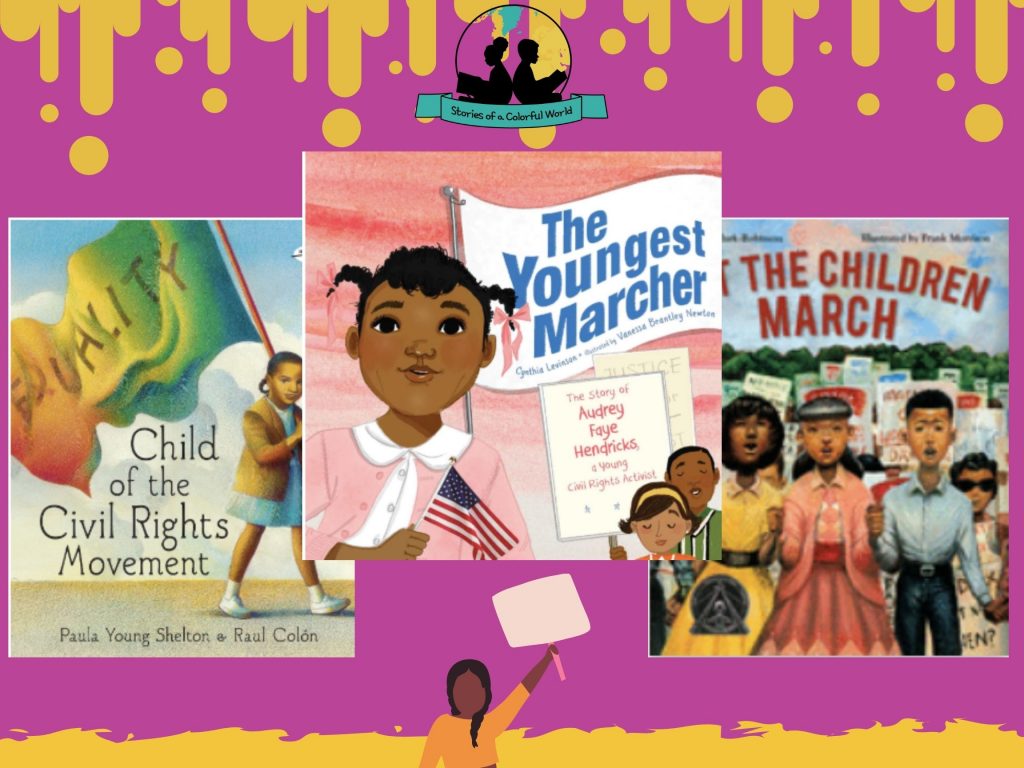 The Youngest Marcher: The Story of Audrey Faye Hendricks, a Young Civil Rights Activist by Cynthia Levinson, Vanessa Brantley-Newton (Ages: 5-10): When powerful leaders came to Audrey’s house, she was expected to stay quiet while the grown-ups spoke.  But Audrey couldn’t contain herself.  She, too, dreamed of eating ice cream inside Newberry’s, sit downstairs at the Alabama, and read from new books at school.  She listened to the dreams of justice and knew she had to do her part.  When the idea of children marching and filling the jails was introduced, Audrey knew it was her chance.  She would become the youngest marcher in Birmingham’s Children’s March in 1963.  ***Pick of the Month***

Let the Children March by Monica Clark-Robinson, Frank Morrison (Ages: 6-9): When the risk for their parents was too great, thousands of Birmingham children heard the cry of Dr. Martin Luther King and set to the streets in protest.  They remained undaunted night after night until freedom rang out. 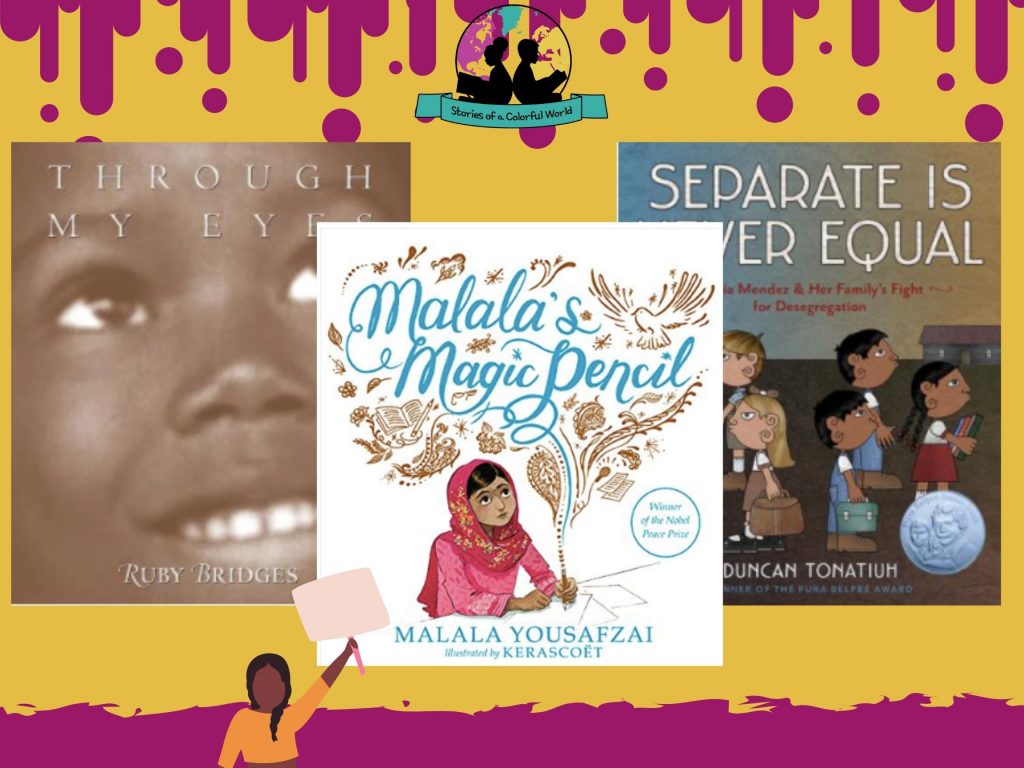 Through My Eyes by Ruby Bridges (Ages 9-12): Through photographs and statements from Ruby, her mother, and teacher, readers get a first-hand account of what it was like for six-year-old Ruby, as she became the first Black student to integrate her school in the 1960s.

Malala’s Magic Pencil by Malala Yousefzai, Keracoët (Ages 4-8): When Malala Yousefzai was younger, she watched a TV show about a boy who had a magic pencil.  He would use his pencil to protect people that needed help.  As Malala grew older and saw injustices in the world, she wished she had a magic pencil to help.  She soon learned to use her voice to be a change in the world.

Separate is Never Equal: Sylvia Mendez and Her Family’s Fight for Desegregation  by Duncan Tonutiah (Ages 6-9): Before Brown v. Board of Education was brought before the Supreme Court, a family paved the way by desegregating schools in California.  When Sylvia Mendez, her two brothers, and cousins were denied enrollment into their neighborhood school, their father filed a suit, Mendez v. Westminster, and won. Seven years later, the Supreme Court desegregated schools across the country.   ***Pick of the Month*** 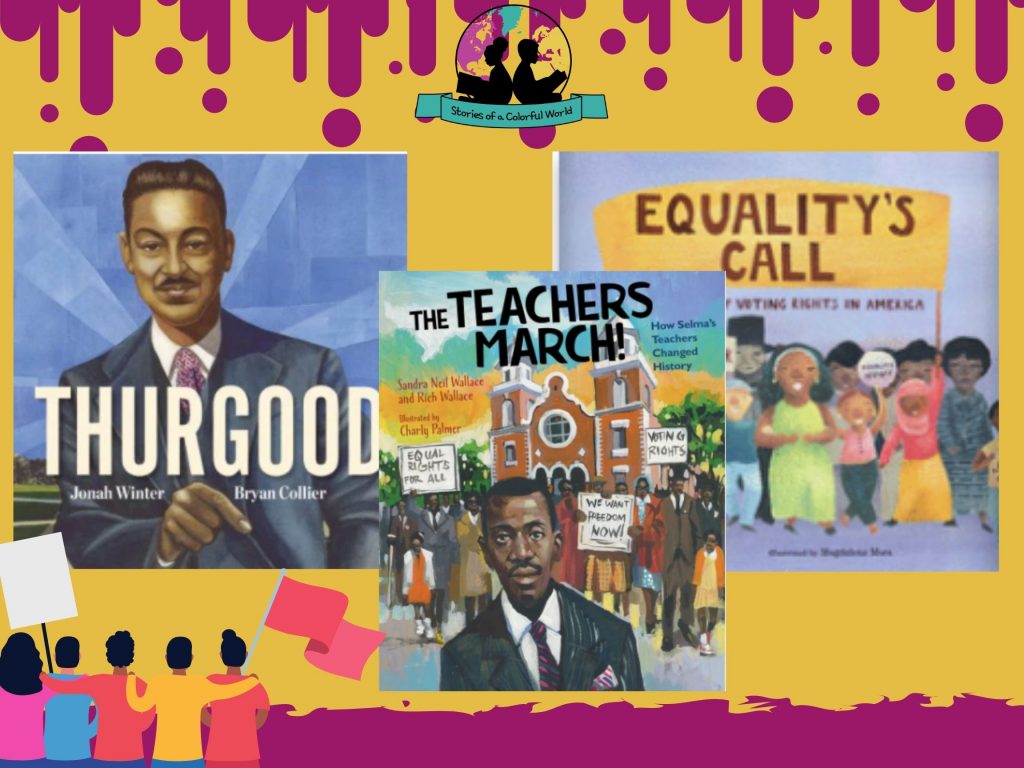 Thurgood  by Jonah Winter, Bryan Collier (Ages 5-9):Thurgood Marshall was born to be a lawyer. He had a knack for arguing. He grew up honing his ability to fight the laws that oppressed Black people. He argued and won cases before the Supreme Court and later became the first Black justice on the land’s highest court. ⠀

The Teachers March: How Selma’s Teachers Changed History  by Sandra Neil Wallace, Rich Wallace, Charly Palmer(Ages 7-10): In the 1960s, laws restricted so many people from voting.  Rev. F.D. Reese wanted change and committed to taking action.  He tried to convince other teachers to show up and show out.  He knew that teachers were “somebody somebodies” in their communities, but the teachers feared losing their jobs.  He stayed vigilant and got more than 100 teachers to stand up and march against injustice.

Equality’s Call: The Story of Voting Rights in America   by Deborah Diesen, Magdalena Mora  (Ages 5-8): This book, written in rhyming verse, tells the history of voting in America.  From the foundation of the US government, voting and representation have been important parts of its fabric.  Yet, many people were left out.  Over time, and through significant movements, more and more Americans have heard equality’s call. 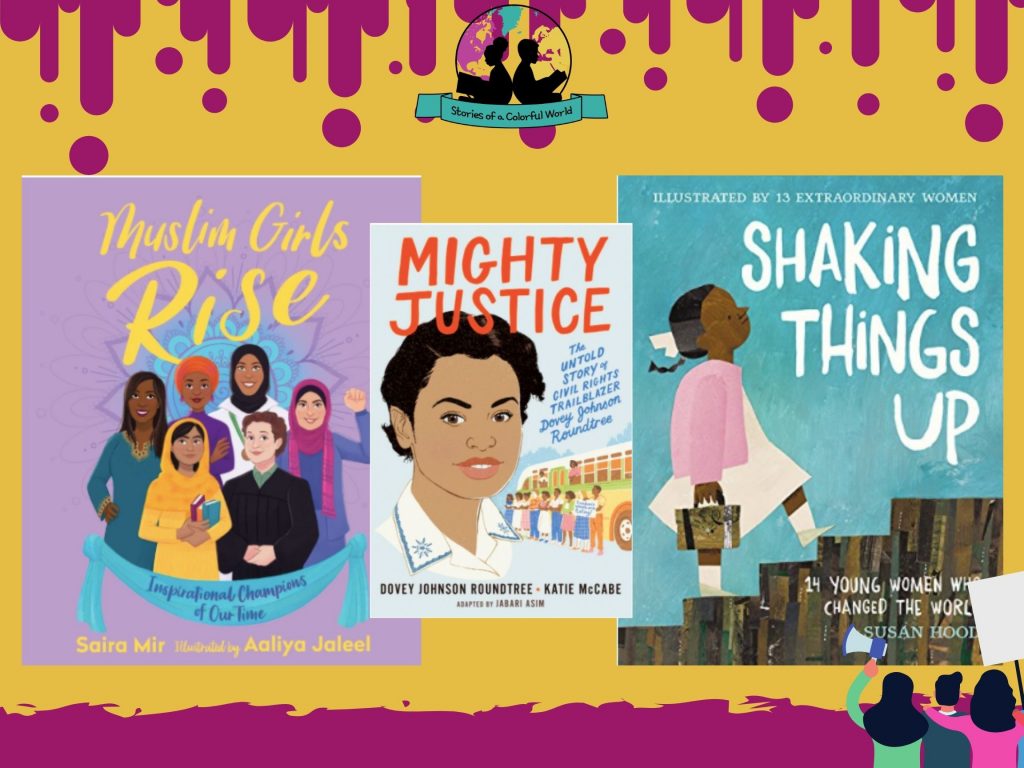 Muslim Girls Rise: Inspirational Champions of Our Time  by Sair Mir, Aaliya Jaleel (Ages 6+):Read the inspirational stories of these 19 Muslim women that followed their dreams, fought for equality in their respective fields, and achieved greatness.

Mighty Justice: The Untold Story of Dovey Johnson Roundtree  by Katie McCabe, Jabari Asim (Ages 10+): A special shout-out goes to our Spelman sister.  Recruited by Mary McCleod Bethune, Dovey was in the first class of African American women to be officers in the army during World War II.  Then becoming a lawyer and one of the fiercest champions of civil rights.  Her cases set precedents for many of the most well-known civil rights victories.

Shaking Things Up: 14 Young Women Who Changed the World  by Susan Hood, Selina Alko, et al. (Ages 4-8):Each page features a poem in varied forms about an extraordinary woman that contributed greatly and shook things up.  The bottom features a brief bio, and each page features a different illustrator. 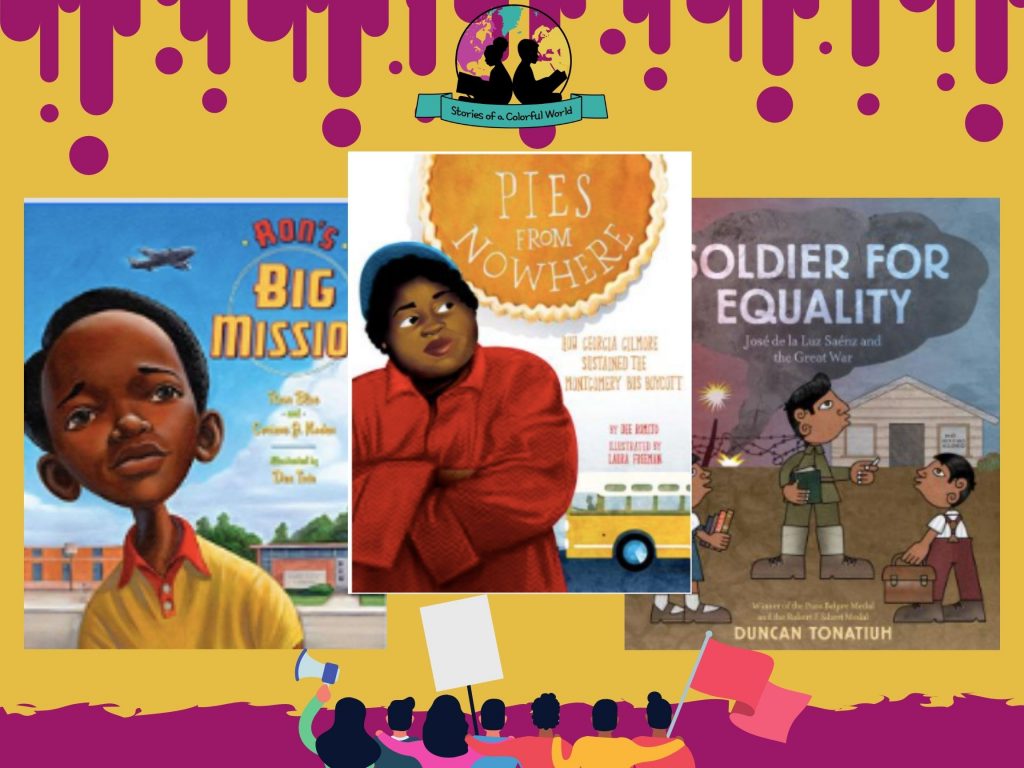 Ron’s Big Mission   by Rose Blue, Corinne Naden, Don Tate (Ages 6-8): All 9-year old Ron wanted to do was be a pilot. He loved planes. But today, Ron was on a different kind of mission. He was headed to the library. He always tried to find books with kids that looked like him, but that was hard. But, he could always find books about planes. Today, Ron didn’t want to sit in the library and read. He wanted to check them out all by himself. However, in segregated South Carolina in the ’50s, that just wasn’t possible. So, what will he do?⠀ ***Pick of the Month***

Pies From Nowhere: How Georgia Gilmore Sustained the Montgomery Bus Boycott   by Dee Romito, Laura Freeman (Ages 5-9): Georgia Gilmore was one of the remarkable women that formed the backbone of the Civil Rights Movement.  When Rosa Parks’s arrest sparked the Montgomery Bus Boycott, Georgia knew she wanted to do her part. But what could she do?  She did what she did best-cook.  Georgia’s food fed hungry protesters, leaders, and contributions bought gas, wagons, and materials to keep the boycott running.  Who knows if they would have been able to sustain the boycott for three hundred and eighty-one days without Ms. Georgia Gilmore. ***Pick of the Month***

Soldier for Equality: José de la Luz Sáenz and the Great War  by Duncan Tonatiuh (Ages 6-8): Duncan Tonatiuh’s illustrative style always brings so much to his books.  This book depicts the life of Luz, a Mexican-American teacher who faced prejudice despite being as American as the kids that tormented him.  He taught in segregated schools until he enlisted in the army.  Luz picked up extraordinary skills that made him invaluable but still not acknowledged for his contributions.  When he returned home, he joined forces with other people of Mexican origin to fight for equal rights.

What are your go-to books to dive into the conversation of equality? Share your comments below.

The days are growing longer, the weather is warming and Easter is growing near.  One…

Summer is underway, and you may be wondering what books will keep kids engaged over…

Inclusivity in the publishing industry is not standard practice. Especially for children’s books, failure to…