Viola Desmond was one brave woman! Now come on here, listen in close and I’ll tell you why …

In Nova Scotia, in 1946, an usher in a movie theater told Viola Desmond to move from her main floor seat up to the balcony. She refused to budge. Viola knew she was being asked to move because she was black. In no time at all, the police arrived and took Viola to jail. The next day she was charged and fined, but she vowed to continue her struggle against such unfair rules.

Viola’s determination gave strength and inspiration to her community at the time. She is an unsung hero of one of Canada’s oldest and most established black communities. Like Claudette Colvin and Rosa Parks, who many years later, in 1955, refused to give up their bus seats in Alabama, Desmond’s act of refusal awakened people to the unacceptable nature of racism and began the process of bringing an end to racial segregation in Canada.  (Ages 5-9) 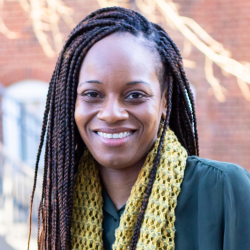 Kanika Mobley
Hi!I'm Kanika.I'm a mother and 20+ year educator.I started my career as a kindergarten teacher and fell in love with helping kids discover their reading identities.As they asked for certain books, I tried with all my might to keep the classroom library filled with high-engaging books that were both mirrors and windows for their experiences.