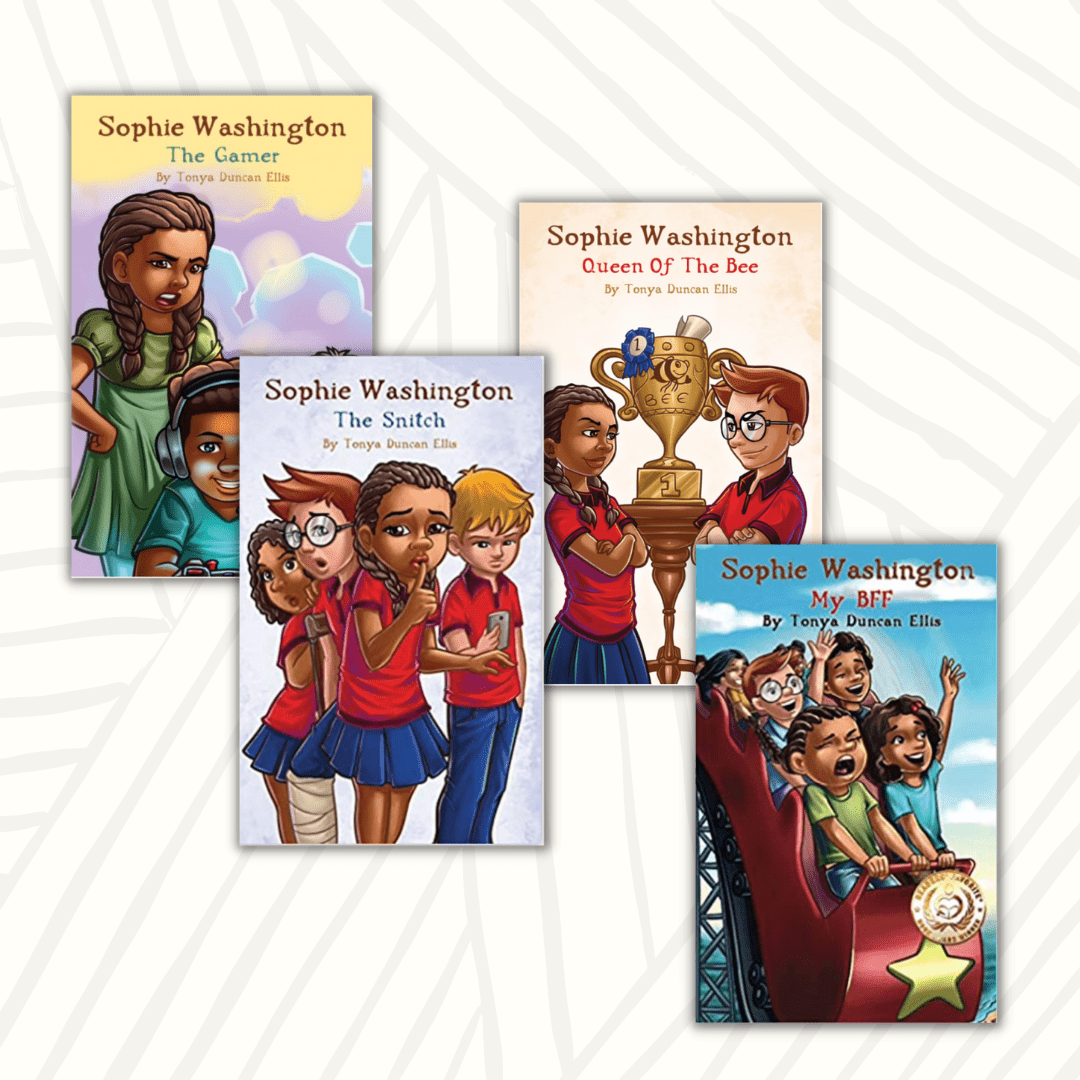 Sophie Washington fans love the best-selling books that feature a hilarious 11-year-old from Houston, TX and her exciting adventures. Once they buy one of the adorable, illustrated, chapter books, most go on to read the entire series. Save yourself some money and get this four-book series starter pack for a fraction of the individual price of all four of the first books in the series. You’ll be glad you did!

Sophie Washington: Queen of the Bee

If there’s one thing 10-year-old Texan Sophie Washington is good at, it’s spelling. She’s earned straight 100s on all her spelling tests to prove it. Her parents want her to compete in the Xavier Academy spelling bee, but Sophie wishes they would buzz off.

Her life in the Houston suburbs is full of adventures, and she doesn’t want to slow down the action. Where else can you chase wild hogs out of your yard, ride a bucking sheep, or spy an eight-foot-long alligator during a bike ride through the neighborhood? Studying spelling words seems as fun as getting stung by a hornet, in comparison.

That’s until her irritating classmate, Nathan, challenges her. There’s no way she can let Mr. Know-It-All win. Studying is hard when you have a pesky younger brother and a busy social calendar. Can Sophie ignore the distractions and become Queen of the Bee?

There’s nothing worse than being a tattletale!
That’s what 10-year-old Sophie Washington thinks until she runs into Lanie, a new girl at school. Lanie pushes Sophie and her friends around at their lockers, and even takes their lunch money. If they tell, they are scared the other kids in their class will call them snitches, and won’t be their friends. And when you’re in the fifth grade, nothing seems worse than that. Excitement at home keeps Sophie’s mind off the trouble with Lanie. She takes a fishing trip to the Gulf of Mexico with her parents and little brother, Cole, and discovers a mysterious creature in the attic above her room. For a while, Sophie is able to keep her parents from knowing what is going on at school. But Lanie’s bullying goes too far, and a classmate gets seriously hurt. Sophie needs to make a decision. Should she stand up to the bully, or become a snitch?

Forty days without video games? Oh no!
Sixth-grader Sophie Washington and her friends are back with an interesting book about having fun with video games while keeping balance. It’s almost Easter, and Sophie and her family get ready to start fasts for Lent with their church, where they give up doing something for 40 days that may not be good for them. Her parents urge Sophie to stop tattling so much, and encourage her second-grade brother Cole to give up something he loves most, playing video games. The kids agree to the challenge, but how long can they keep it up? Soon after Lent begins, Cole starts sneaking to play his video games. Things start to get out of control when he loses a school electronic tablet he checked out without his parents’ permission, and comes to his sister for help. Should Sophie break her promise and tattle on him?

That’s what friends are for

Sophie and Chloe have been best friends since they met in kindergarten. They get along like chips and salsa and do everything together from playing tennis to cheering on the school cheer squad. Lately, Chloe’s been leaving Sophie out, and she doesn’t know why. Sophie does everything she can to make her best friend happy, but it’s not working. Then Chloe asks Sophie to fib to a teacher to help her out and she learns the true meaning of friendship.