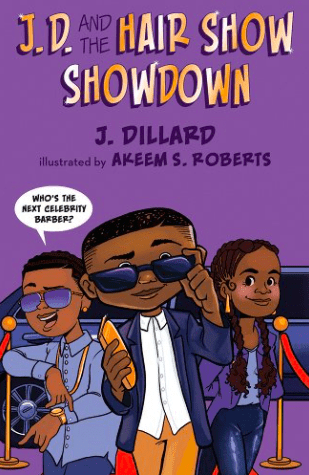 J.D. and the Hair Show Showdown I J. Dillard

At only eight years old, J.D. the Kid Barber has already won a barber battle and appeared on local TV. Now he’s the youngest barber to be invited to the Beauty Brothers Hair Expo in Atlanta! J.D. gets the VIP treatment–he takes his first flight, rides in a limo for the first time, and gets gifts from the show’s sponsors. At the show, there are hair classes to take, product samples to try, and some of J.D.’s favorite hair influencers to meet. And, of course, there’s his own demo alongside kid hairstylist, Isabel Is Incredible. But what J.D. is most excited about is snapping a pic with eleven-year-old rap sensation Li’l Eazy Breezy, which is harder than it sounds! The world of hair and beauty is so much bigger than J.D. could’ve imagined, and he’s ready to step up his game.