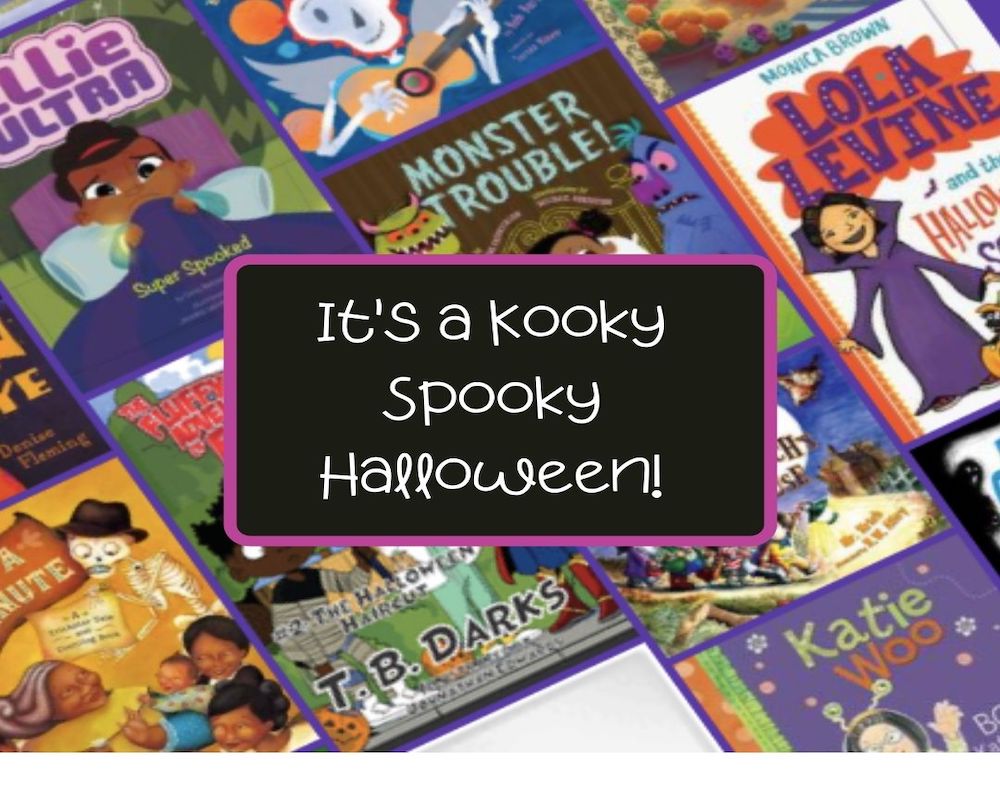 Like most things we’ve come to expect in 2020, Halloween may look a little differently.  While we might be leery of going door-to-door trick-or-treating this year, that doesn’t have to ruin the Halloween spirit.  There are so many ways that we can set the stage for some spooky fun thrills, even during a COVID Halloween.

We’ve pulled together a list of some great Halloween books for you and your kids.  Although most Halloween children’s books feature ghosts, ghouls, and witches of the green and orange variety, real children can be found in some of our goodies.  If you’re looking for Halloween books featuring children of color, here are a few that will keep you entertained or on the edge of your seat. 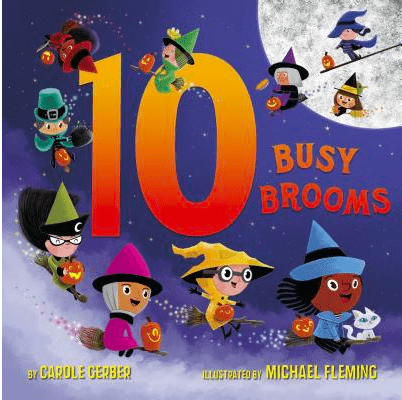 Young readers will want to fly the night sky with the ten little witches in this bright and adventurous Halloween story. Whether zooming past rattling skeletons, buzzing by pie-stealing mummies, or soaring over a werewolf with bad breath, this exciting group of witches and their high-flying Halloween adventures will have readers cheering! Plus, play a game of I Spy and find the cat and owl on every page! 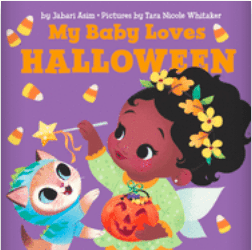 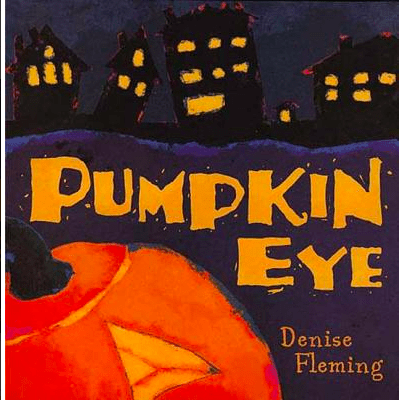 It’s Halloween night! The rising moon lights the way for trick-or-treaters and sets the mood for a spooky celebration where imagination rules. 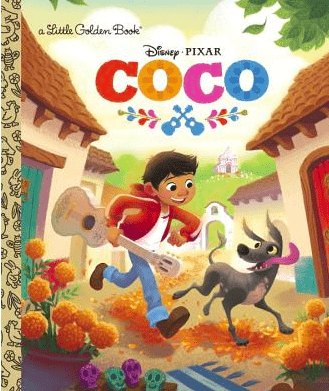 Despite his family’s baffling generations-old ban on music, Miguel dreams of becoming an accomplished musician like his idol, Ernesto de la Cruz. Desperate to prove his talent, Miguel finds himself in the stunning and colorful Land of the Dead following a mysterious chain of events. Along the way, he meets charming trickster Hector, and together, they set off on an extraordinary journey to unlock the real story behind Miguel’s family history. 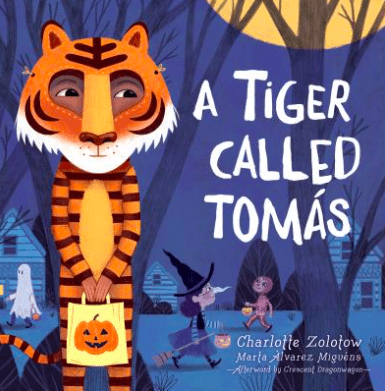 When Tom’s and his family moved to a new house on a new street, he took it into his head that the new people might not like him. Tom’s mom encourages him to go out and meet the kids in his neighborhood, but Tomas is too shy. Instead, he sits on his stoop, watching the world go by. But on the night of Halloween, an opportunity arrives in the form of a tiger costume, complete with a mask that hides his identity. He can go trick-or-treating without anyone knowing it’s him. But Tom will soon discover his costume doesn’t hide him quite as well as he thinks… 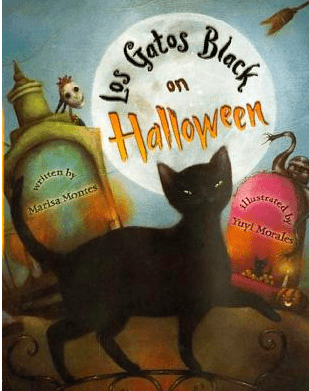 Under October’s luna, full and bright, the monsters are throwing a ball in the Haunted Hall. Las brujas come on their broomsticks. Los muertos rise from their coffins to join in the fun. Los esqueletos rattle their bones as they dance through the door. And the scariest creatures of all aren’t even there yet! 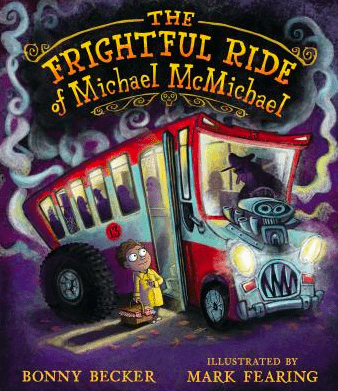 When the Thirteen bus pulls up one dreary, stormy evening, something about it doesn’t seem quite right. The driver grins down with a mouthful of long, white teeth, and there’s barely any room to sit, but Michael McMichael is bringing his gran something very dear, so he gets on board despite his misgivings. But as they travel on and the rest of the passengers get off, Michael realizes there’s nothing normal about this bus — and the driver is getting creepier by the minute. 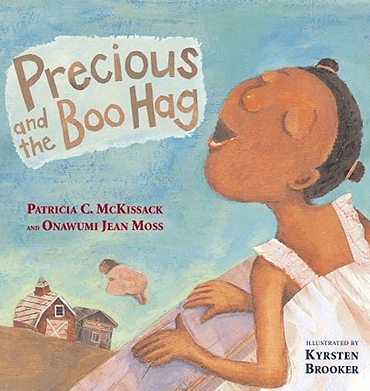 When Precious is left home alone with a stomachache, she’s got nothing but a warning from Mama — “Don’t let nothing or nobody into this house” — to keep her company. You see, “nothing or nobody” could turn out to be something awful: the Boo Hag! The Boo Hag’s got a voice that rumbles like thunder and hair that shoots out like lightning. And she can disguise herself to look like anything. So when the Boo Hag comes calling, will Precious be clever enough to outwit even the trickiest trickster?

Lola Levine and the Halloween Scream by Monica Brown (Ages 6-10):

It’s Halloween–Lola and Ben’s favorite holiday. She loves pumpkins, scary costumes, monsters, and ghosts–and she likes to scare people, too. But when Lola plays a scary joke on her super best friends, Josh Blot and Bella Benitez, it doesn’t go as planned. Can Lola learn from her mistake and still have a happy Halloween?

In the Disney and Pixar movie Coco, Miguel loves music, but his grandmother refuses to let him play the guitar. Follow along as Miguel travels to the Land of the Dead and brings his passion for music home to his family.

Superheroes are never scared-at least that’s what our hero Fromo believes. Halloween is her least favorite holiday, and for good reasons. Her biggest secret isn’t her secret identity, but that she is a scaredy-cat. Ghost, zombies, and ghouls alike will send this hero running. But will she be able to face her fears and save the day? Dive into this Halloween showdown as Fromo, and her pals return to save the school, save Halloween, and, most importantly, fix Fromo’s big mistake.

The Jumbies by Tracey Baptiste (Ages 9-12)

Corinne La Mer claims she isn’t afraid of anything. Not scorpions, not the boys who tease her, and certainly not jumbies. They’re just tricksters made up by parents to frighten their children. Then one night, Corinne chases an agouti all the way into the forbidden forest, and shining yellow eyes follow her to the edge of the trees. They couldn’t belong to a jumbie. Or could they? 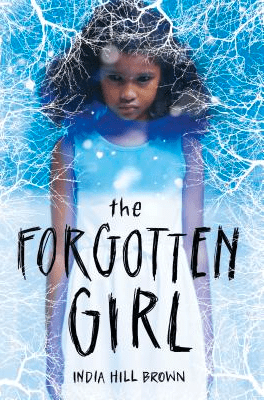 Do you know what it feels like to be forgotten?  On a cold winter night, Iris and her best friend, Daniel, sneak into a clearing in the woods to play in the freshly fallen snow. There, Iris carefully makes a perfect snow angel — only to find the crumbling gravestone of a young girl, Avery Moore, right beneath her.  Immediately, strange things start to happen to Iris: She begins having vivid nightmares. She wakes up to find her bedroom window wide open, letting in the snow. She thinks she sees the shadow of a girl lurking in the woods. And she feels the pull of the abandoned grave, calling her back to the clearing…

Check out these titles and many more in our Halloween-themed Bookshop collection. What are your favorite books to get into the Halloween mood?  Comment below.

*SOCW may collect a share of sales from the links on this page.  However, we only recommend items we love!

In Our Feelings: Books dealing with emotions

Happy New Year!  2020 created more space for us to find and do more of…

Don’t We Explore the Great Outdoors?

Last year as the days turned to months, after my son and I had exhausted…