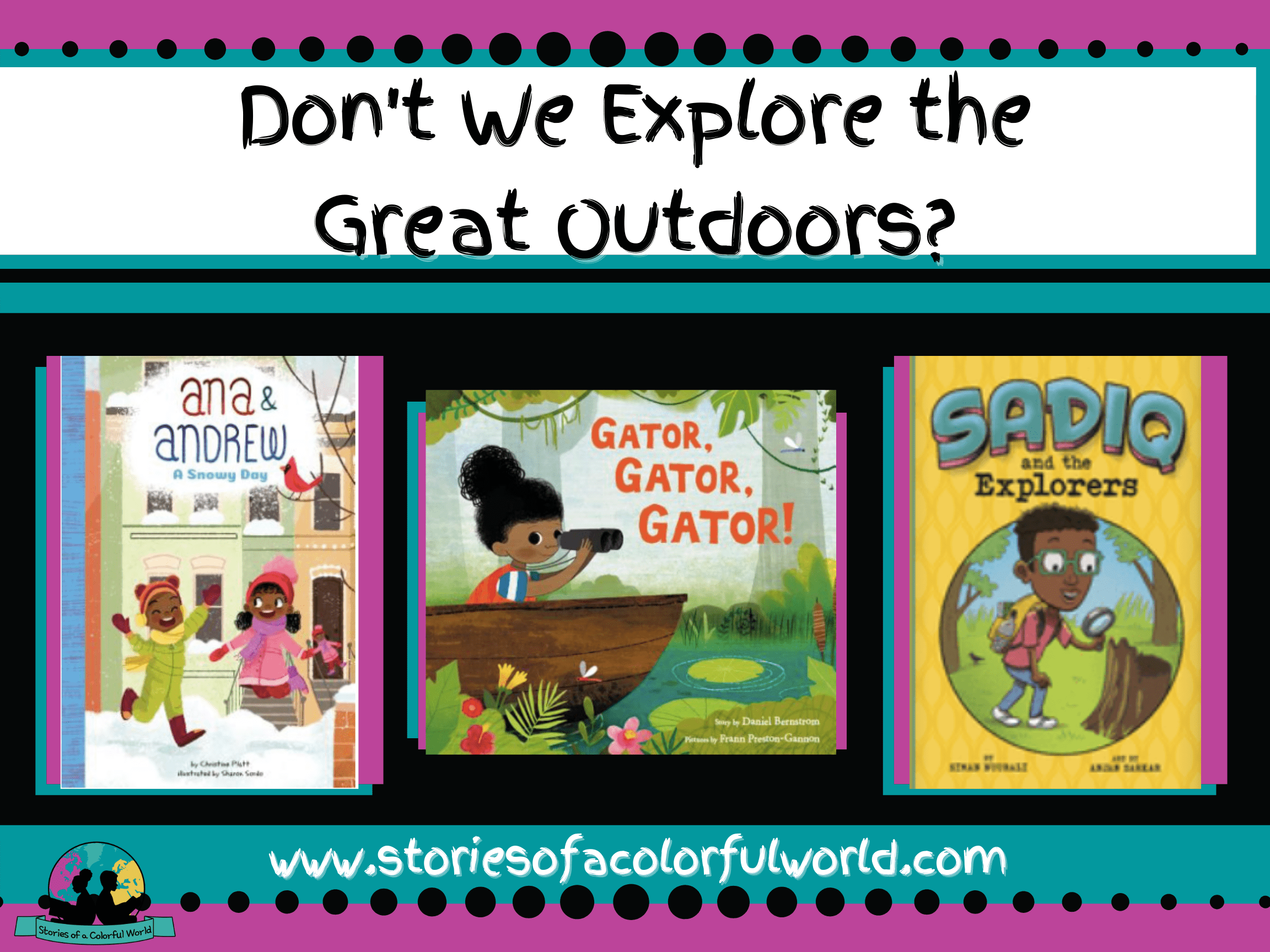 Last year as the days turned to months, after my son and I had exhausted every physical and digital game, read every book, and watched everything Netflix, Hulu, and Amazon had to offer, the walls began to close in on us.  Like so many others, we searched for socially distanced activities to do outside.  Ones that made us feel safe. 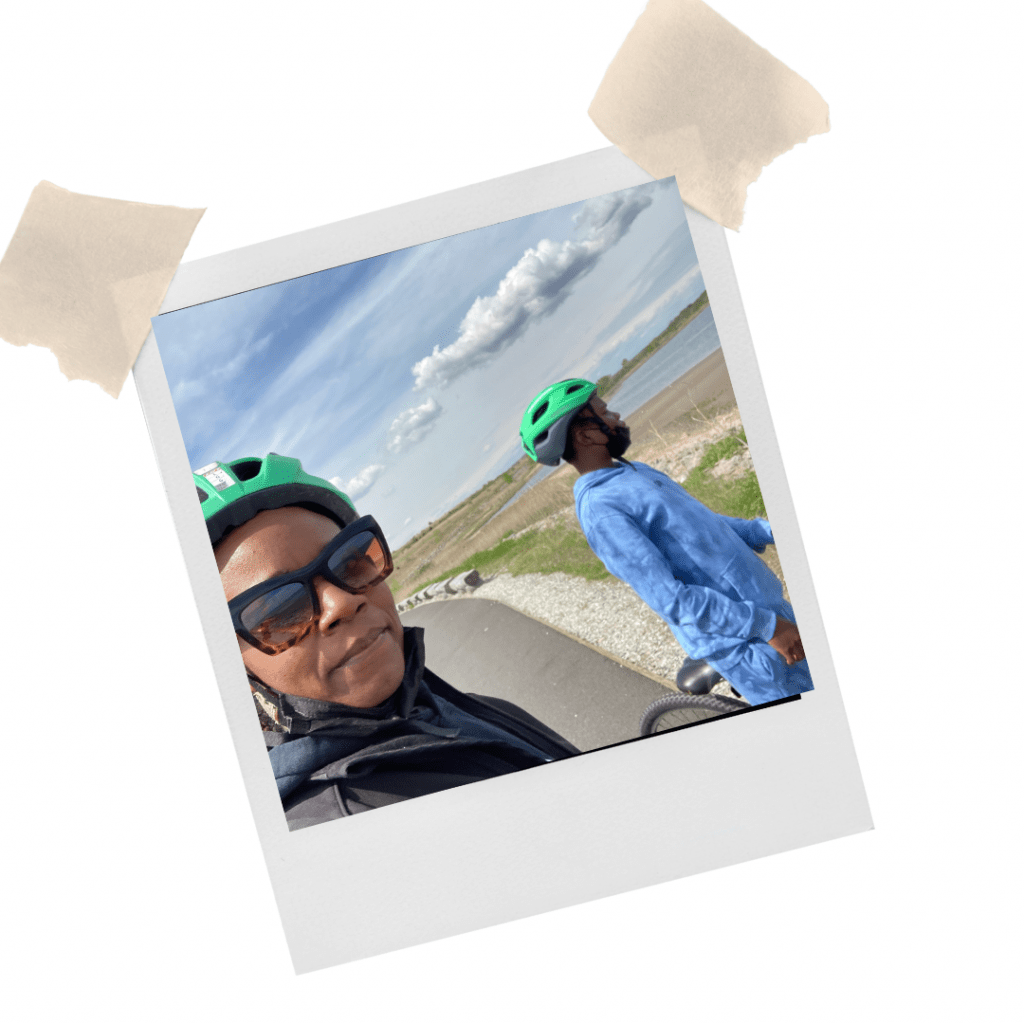 First, we bought bikes.  Based on the prices and the limited availability, I guess so did everyone else in America.  We rode in the neighborhood, and we ventured through nature trails and on beach boardwalks.  We hiked paths and up through nearby mountains, running into all types of birds, families of ducks, fish, and even a passing band of deer.  We were not alone.  There were so many other people, particularly people that looked like us.  We felt safe and got the physical and mental exercise we needed at the time. 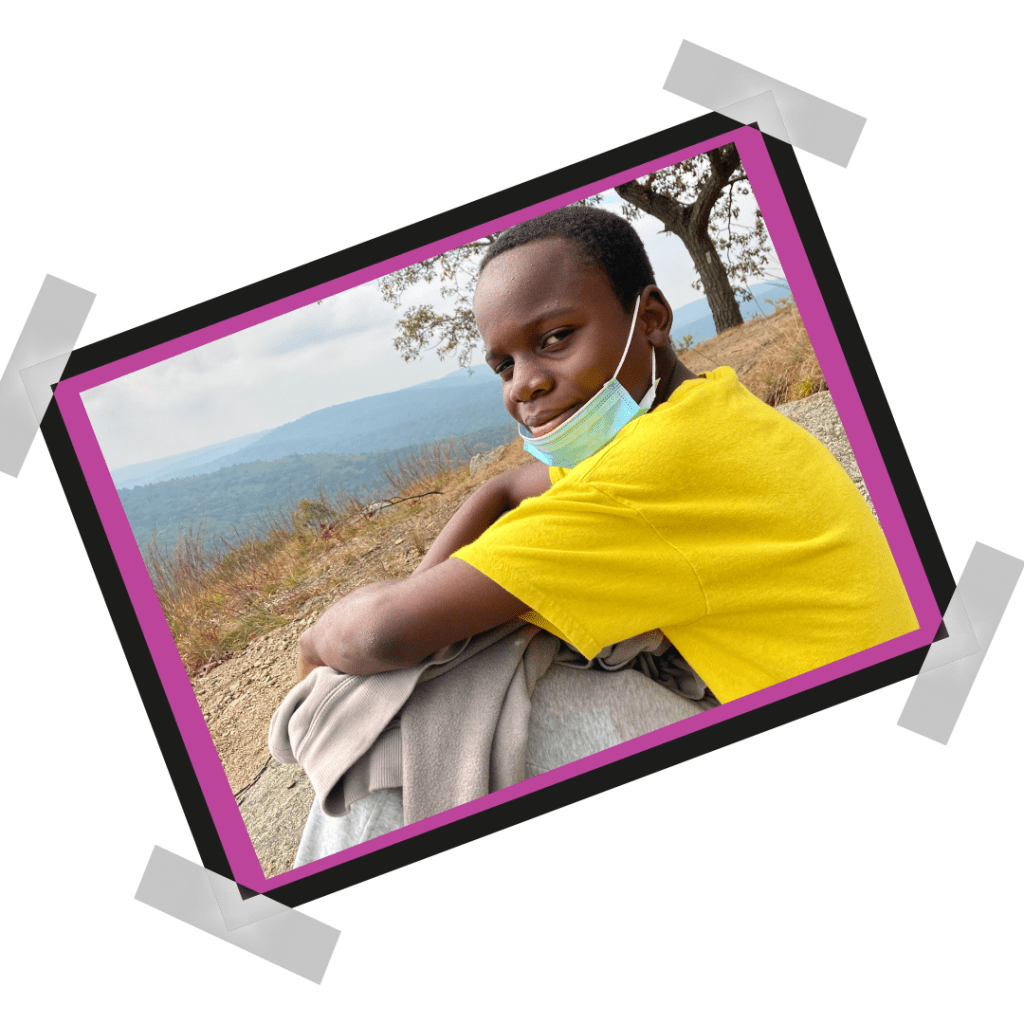 A few weeks ago, when my son asked to head back to Bear Mountain, it made me reflect on an article I came across by Ashley Fetters, “Where Is the Black Blueberries for Sal?” It addressed the lack of Black characters in children’s picture books associated with exploring the outdoors and nature for fun.  Her article, written in May 2019, discussed the many children’s books that featured Black characters exploring their urban neighborhoods or happening upon animals, bugs, or gardens.  You may even come across books with imaginative kids dreaming of some wilderness adventure, but just nature-loving, fishing, hiking, camping, even girl or boy scouting books are rare to nonexistent for characters of color.  I mean, if we think about it, there wasn’t anything that remarkable about Blueberries for Sal by Robert McCloskey.  Just a regular book about a girl and her mom out blueberry picking, eating most of them along the way, then getting lost, yet it’s a Caldecott-winning book.  Now don’t get me wrong, I still consider Blueberries for Sal a classic book.  But, don’t kids of color go blueberry picking too?

Following  Ashley Fetters’s article, DiverseBookFinder searched through their collections because surely there had to be more picture books other than the four Ashley mentioned in her article.  Their goal was to “unearth every book in which young Black protagonists actively explore the outdoors with no purpose other than to convene with nature.”

They were able to identify 16 books (total y’all) that met this criterion. Yet only two were written by Black authors. They also noticed that 7 of the books feature multiracial families and only 3 depict Black parents actively engaged in developing the child’s curiosity or exploration of nature. In many circumstances, a white adult or non-Black person of color introduced the concept of exploration even though the Black parent was clearly present.

These findings are sad but not surprising.  But surely, publishers looked at this trend and put an all-call out to find more diverse representations of Black kids and families exploring nature just for fun, right? That was 2019. By now, there has to be more of these books by Black authors, right?  Right?  *crickets*

Since the 2015 reports of the underrepresentation of people of color in children’s literature, there have been significant gains.  However, the gains made with the representation of Black children in wilderness spaces, particularly picture books, is still minimal.  Since Diversity Bookfinder’s search, there have been less than a handful of additional books written by Black authors to add to this list.

We know that books can be powerful teachers that reinforce what is possible and also who “belongs.”  We believe that every child should have books that represent “windows” and “mirrors.”  The mirrors allow those bird-watching, Girl Scout trekking, skiing, camping, fishing, hiking, and surfing kids to see themselves represented in their books doing the things that they enjoy most.  The windows will allow Black children to expand their possibilities of seeing what they can enjoy and explore while also allowing other kids of color and white kids to see that Black children participate in these spaces.  It allows everyone to see the commonalities and humanity in us all.  Isn’t that what we all want? 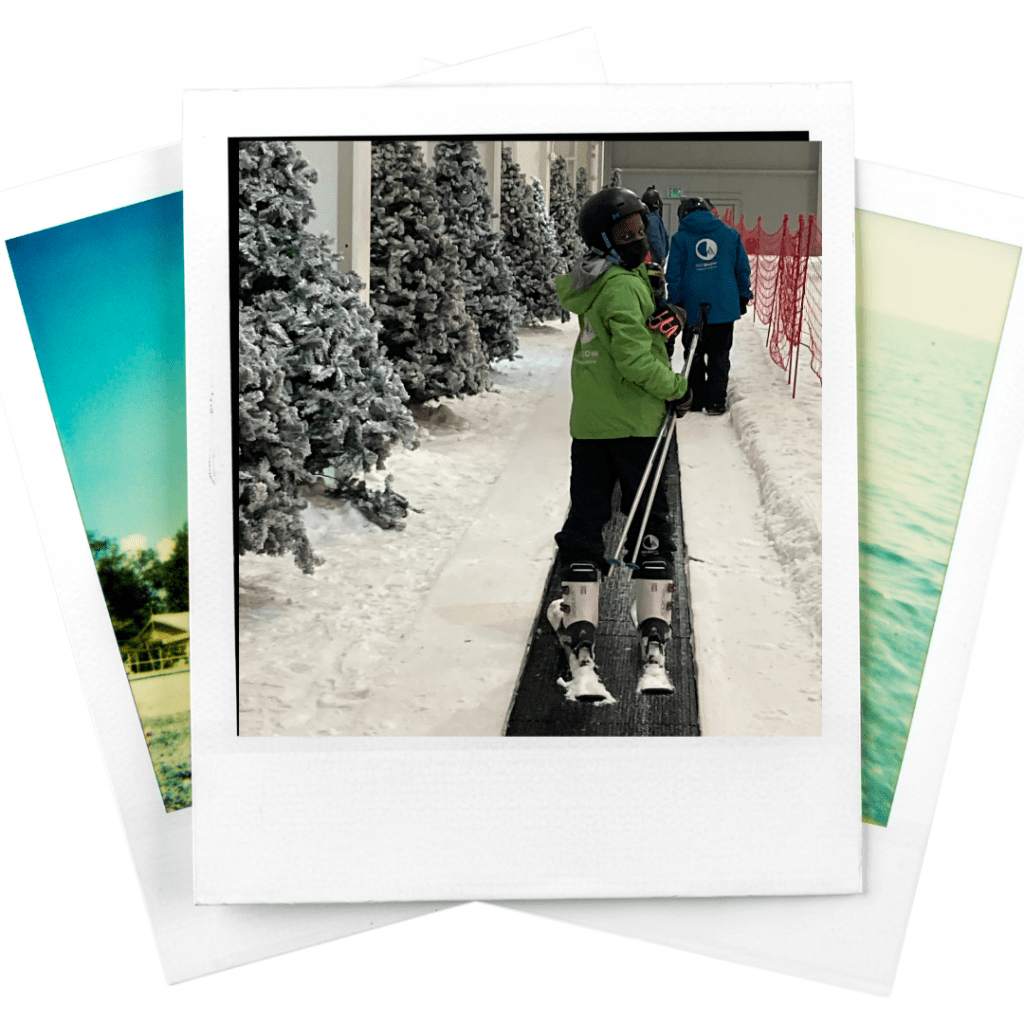 Below you’ll find a few picture books, early readers, and middle-grade novels in our collections that feature kids of color exploring and enjoying nature written by authors of color. 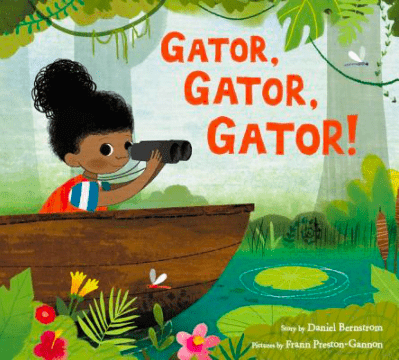 A fearless little girl takes off in search of a giant gator–but she’s not going into that swamp alone.  No way! She wants YOU, the reader, to come along.

Readers experience the feeling of being on a real adventure deep in the swamp. Rhyming, repeating, and exhilarating, the text is a delightful read-aloud romp that will entertain and make everyone’s heart skip a beat. (Ages 4-8) 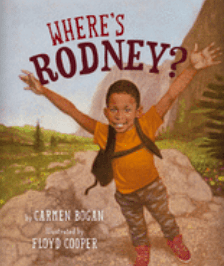 Rodney is that kid who just can’t sit still. He’s inside, but he wants to be outside. Outside is where Rodney always wants to be. Between school and home, there is a park. He knows all about that park. It’s that triangle-shaped place with yellow grass and two benches where grown-ups sit around all day. Besides, his momma said to stay away from that park. When Rodney finally gets a chance to go to a real park, with plenty of room to run and climb and shout and to just be himself, he will never be the same. (Ages 4-8) 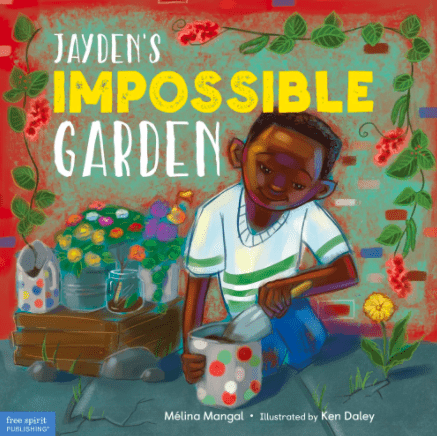 Amidst all the buildings, people, and traffic in his neighborhood, Jayden sees nature everywhere: the squirrels scrounging, the cardinals calling, and the dandelions growing. But Mama doesn’t believe there’s nature in the city. So Jayden sets out to help Mama see what he sees. With the help of his friend Mr. Curtis, Jayden plants the seeds of a community garden and brings together his neighbors–and Mama–to show them the magic of nature in the middle of the city.  Jayden’s love of nature will inspire readers to see their environment and surroundings as bursting with opportunities for growth and connection. (Ages 4-9) 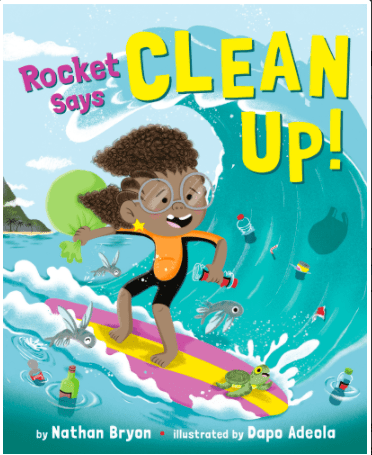 Rocket is off to the islands to visit her grandparents. Her family loves nothing better than to beach comb and surf together…but the beach is clogged with trash! When she finds a turtle tangled in a net, Rocket decides that something must be done! Like a mini Greta Thunberg, our young activist’s enthusiasm brings everyone together…to clean up the beach and prevent plastics from spoiling nature. (Ages 3-7) 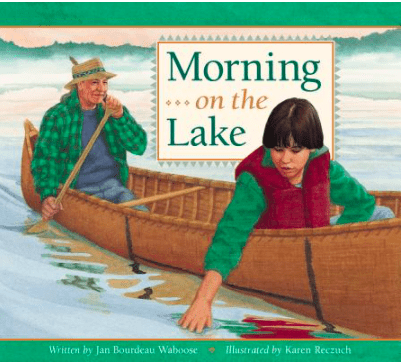 Morning on the Lake! by Jan Bourdeau Waboose,  Karen Reczuch

A young boy and his grandfather set out in a birchbark canoe early one spring morning in the first of three linked stories. Together, they discover the peaceful beauty of the lake. In the second story, the sun rises high in the summer sky as they climb a rocky cliff for a bird’s-eye view of the land. And, finally, as an autumn night descends, they venture into the woods. Under the patient and gentle guidance of his grandfather, the boy gradually comes to respect the ways of nature and to understand his own place in the world.  (Ages 5-9) 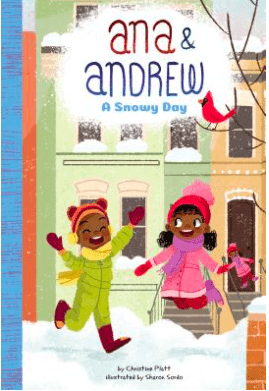 School is canceled! Ana & Andrew play in the snow with their neighbors and learn to make snow ice cream. They save some snow cream in the freezer for their cousins in Trinidad who have never seen snow. This is a great chapter book for those early readers. (Ages 5-7) 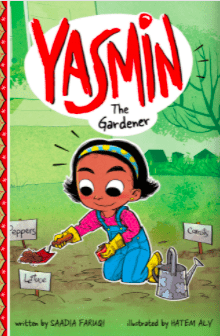 It’s spring! Yasmin and her baba are excited to plant their garden, and Yasmin chooses a flower seedling. She gives it plenty of sun, water, and good soil . . . so why is it wilting? Watching Nani sit in the sun gives Yasmin a bright idea, and she knows just what her little plant needs. (Ages 5-7) 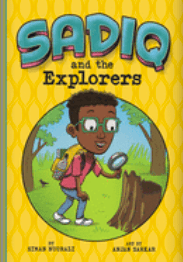 Sadiq and the Explorers by Siman Nuurali, Anjan Sarkar

After a hiking trip to a nearby park, Sadiq is inspired to start an Exploring Club. When a neighbor asks the club to create a scavenger hunt for the community’s annual Fourth of July celebration, the kids are excited! But before they can lead others on a nature expedition, they’ll have to do some exploring of their own. (Ages 6-8) 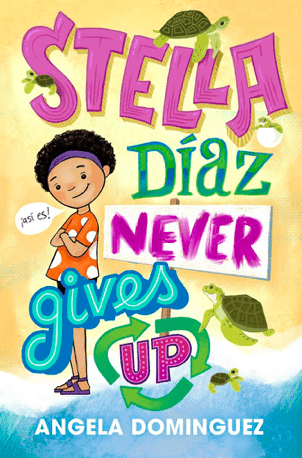 Stella gets a big surprise when her mom plans a trip to visit their family in Mexico! Stella loves marine animals, and she can’t wait to see the ocean for the first time . . . until she arrives and learns that the sea and its life forms are in danger due to pollution.

Stella wants to save the ocean, but she knows she can’t do it alone. It’s going to take a lot of work and help from old and new friends to make a difference, but Stella Díaz never gives up! (Ages 6-9) 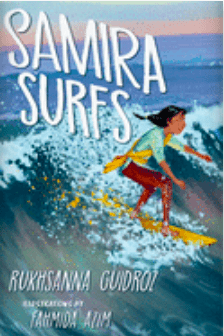 Samira thinks of her life as before and after: before the burning and violence in her village in Burma when she and her best friend would play in the fields, and after when her family was forced to flee. There’s before the uncertain journey to Bangladesh by river, and after, when the river swallowed her nana and nani whole. And now, months after rebuilding a life in Bangladesh with her mama, baba, and brother, there’s before Samira saw the Bengali surfer girls of Cox’s Bazar, and after, when she decides she’ll become one. (Ages 8-12)

You can help to increase the number of books published by adding books to your library that feature kids just enjoying nature for fun.  You can also write, email, and/or tweet children’s book publishers asking for more picture books about kids of color exploring “the wonders of the natural world” written by authors of color.  The person that writes the story, controls the narrative.  While the gap is shrinking, Black authors still only write close to 50% of books about Black characters.  Each small act makes a ripple that can create a big wave.  Our hope is that in two years from now, we will not only see an increase in books featuring nature-loving kids, but we’ll also see even more kids and families on the trails, waterways, and slopes as a result.

You can find a few more titles about kids in nature written by BIPOC authors in our Bookshop collection, “Books about Nature.”  We are constantly updating our selections.

12 Picture Books to Celebrate Giving Thanks!

It's not always easy deciding how you want to approach Thanksgiving.  There are still glaring…

Wondering what to fill your young readers' shelves with this fall?  As kids head back…

Fall Into a Good Book

Fall is in full swing and the temperatures are beginning to drop. Kids are getting…