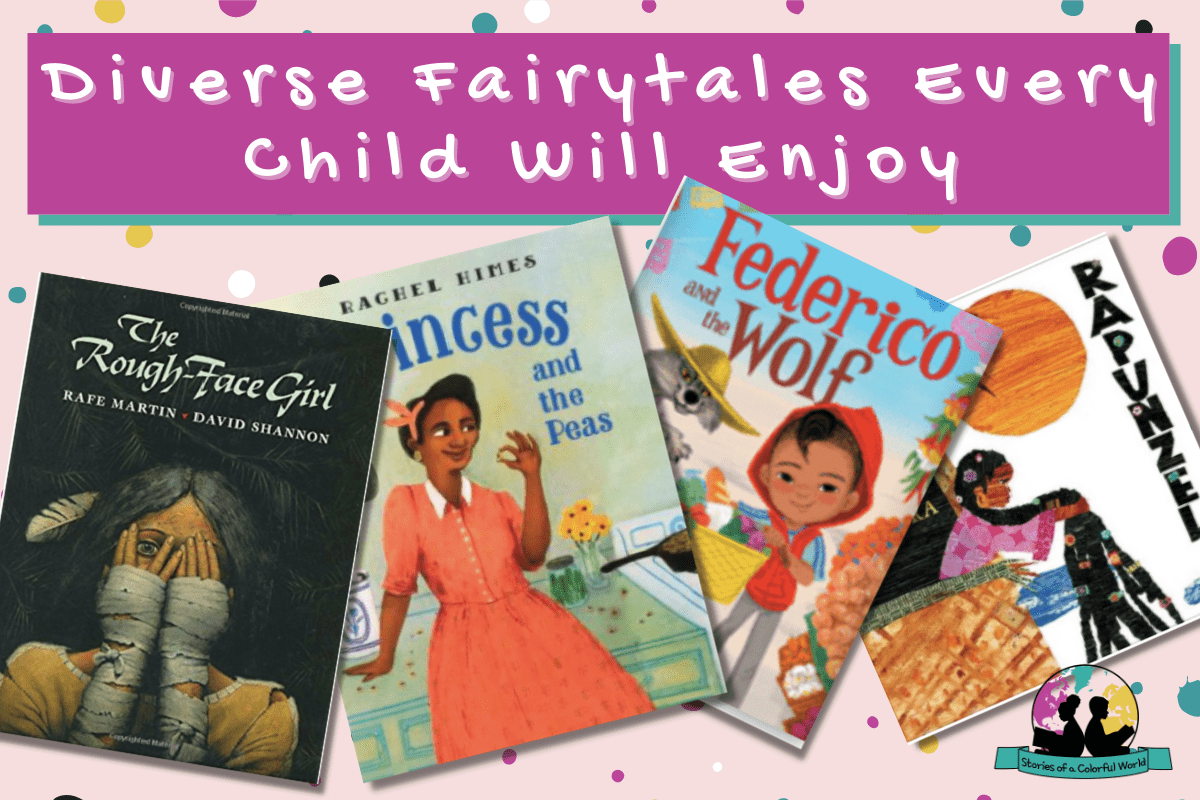 When I was a little girl, I loved fairytales. They were magical and enchanting and would whisk me into a magical land.   My aunt started collecting the VHS tapes of Disney movies (VHS 😩, le sigh)  She had the classics-Bambi, Snow White, Cinderella, the Little Mermaid, and the list goes on.  My cousins and I would all sit and watch them over and over again. We would often hear her say that she was saving them so her grandchildren would also get an opportunity to enjoy them. Little did she know that not only would technology advance beyond the VCR, but her grandchildren would have appetites and accessibility to fairytales that represented characters that mirrored their images.

One of the benefits that today’s children get to enjoy is that there are so many multicultural and alternative versions of fairytales, even though adaptations have been on most continents for centuries.   Children today get to see main characters that look like them and get a glimpse into so many cultures. They can experience getting lost in magical worlds that always end in “happily ever after.” We know that life doesn’t always have a happy ending. But, don’t all children deserve to be inspired by the hope that people who look like them also get the “happily ever after” at the end?

Many continue to find fairytales problematic, and they are indeed. Yet, they provide so many opportunities to have richer conversations. You could talk about gender roles, familial and romantic relationships, similarities between different versions and dive deeper into characters, settings, and plots. My favorite games to play are creating alternative endings or flipping the protagonist and antagonist’s roles when retelling.

Here are a few variations to some classic fairytales to explore with your little readers in addition to the originals. 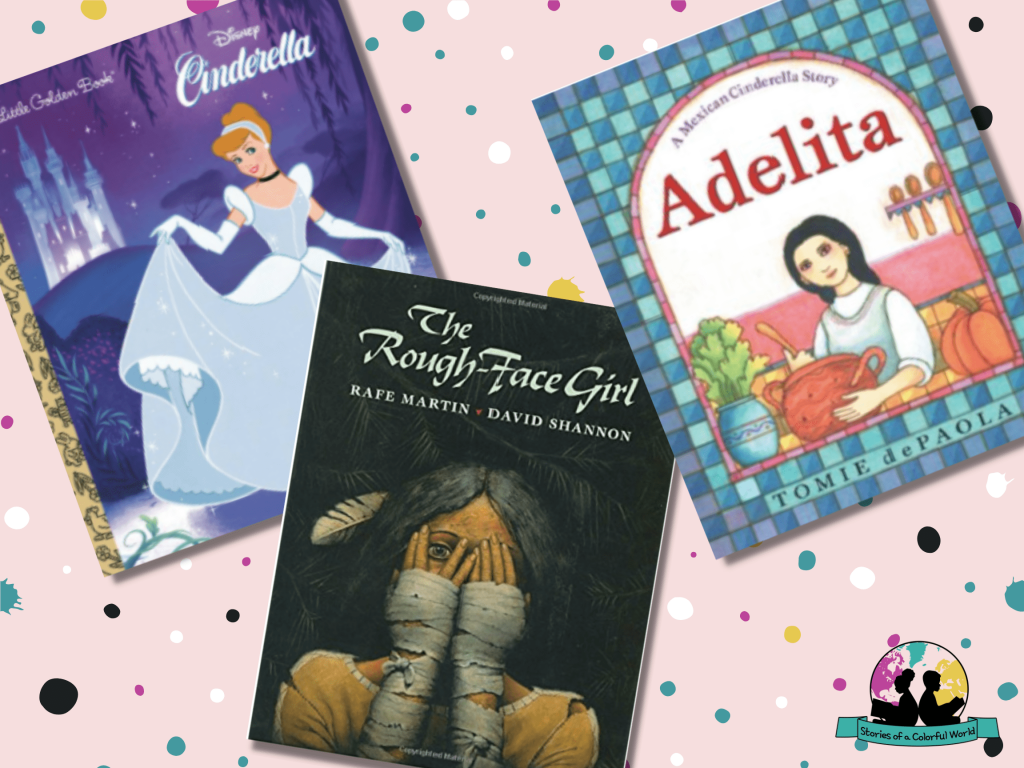 Set amongst the Algonquin tribes of North America, a young girl lives with her father and two sisters. Scarred from working by the fire, she was determined to marry the “Invisible Being.” Instead of a fairy godmother, she relies on her own resolve. This is a beautiful retelling and message for young readers: beauty is only skin deep. (Ages 4-8)

After losing her mother and loving father, Adelita endures the cruelty of her stepmother Señora Micaela de la Fortuna and her two daughters, Dulce and Valentina. With the help of Esperanza, Adelita makes her way to the fiesta, where Javier is looking for a wife. Of course, at the fiesta, Javier falls in love with Adelita. Instead of the traditional glass slipper, Adelita is found because of her mother’s rebozo- a shawl that Javier finds hanging out of her window. The Spanish vocabulary and the Mexican art embedded within each page brings this story to life. (Ages 4-8) 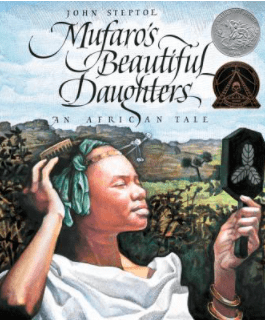 Not quite a Cinderella retelling, but this classic is a must-have in every home. Mufaro had two beautiful daughters, Nyasha and Manyara. When the king is ready to marry and invites the most beautiful daughters in the land to appear, Mufaro brings his girls. One is kind and considerate, and the other is arrogant and hot-headed. Can you guess which one marries the king? (Ages 4-8)

The Princess and the Pea 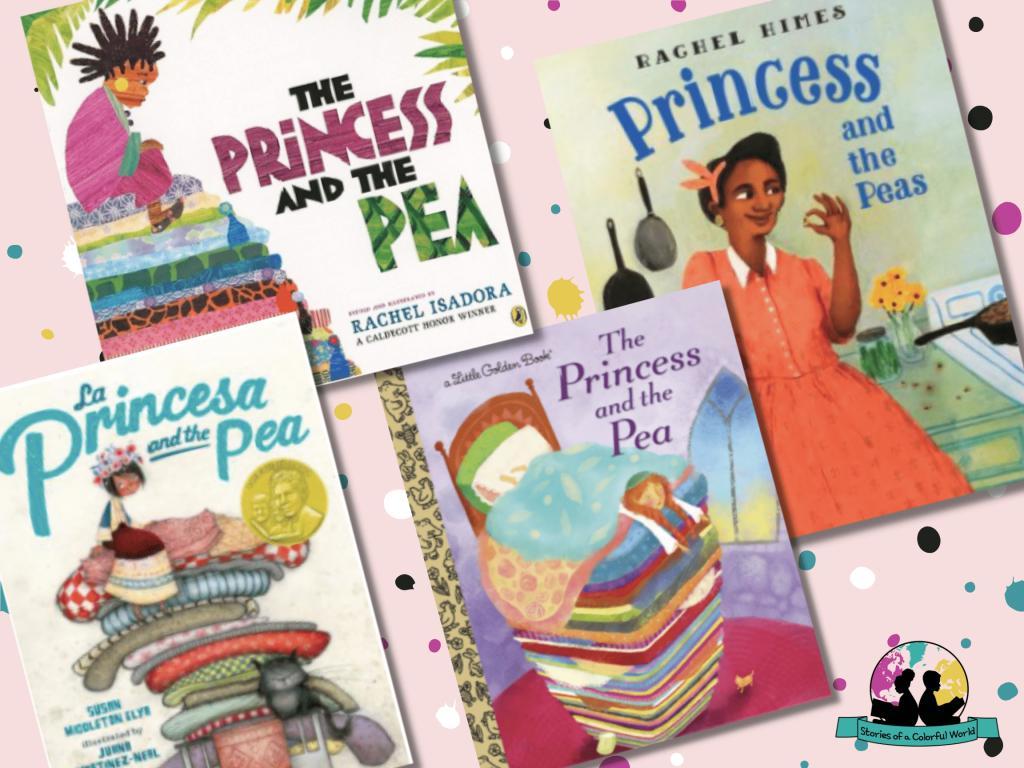 The Princess and the Pea by Rachel Isadora

This classic retelling is set in Africa. When a young prince sets to find a wife, he travels far and wide to find a true princess. With every prospect, he determines that there is something not quite right. One night when a princess arrives at his door, the queen determines there is only one way to find out if she is real. Would she pass the test? The collage illustrations alone are enough to captivate even the youngest reader (Ages 4-8)

This book is full of cute little twists. The prince wanted a wife, but his mother was very picky and tried to sabotage each prospective bride. When a young woman riding past catches the prince’s eye, he falls for her immediately. As his mom plots a test for the young maiden, we learn whether it really works. This retelling incorporates Peruvian culture, Spanish words and told in rhyming verse. (Ages 4-8)

The Princess and the Peas by Rachel Himes

Set in Charleston County, South Carolina, in the mid-1950s. John decides that he’s ready to get married. When he tells his Ma Sally, she was hesitant. Who would be able to feed her baby as well as she did? “Have you tried Miss Harriet’s cornbread? Dry as dust and sour as three-week-old milk.” (👀 the shade hunny 😂 ) As Ma Sally plots to help John find the best wife, she creates a plan. Who will pass Ma Sally’s test and win John’s heart? Love the twist at the end. (Ages 5-8) 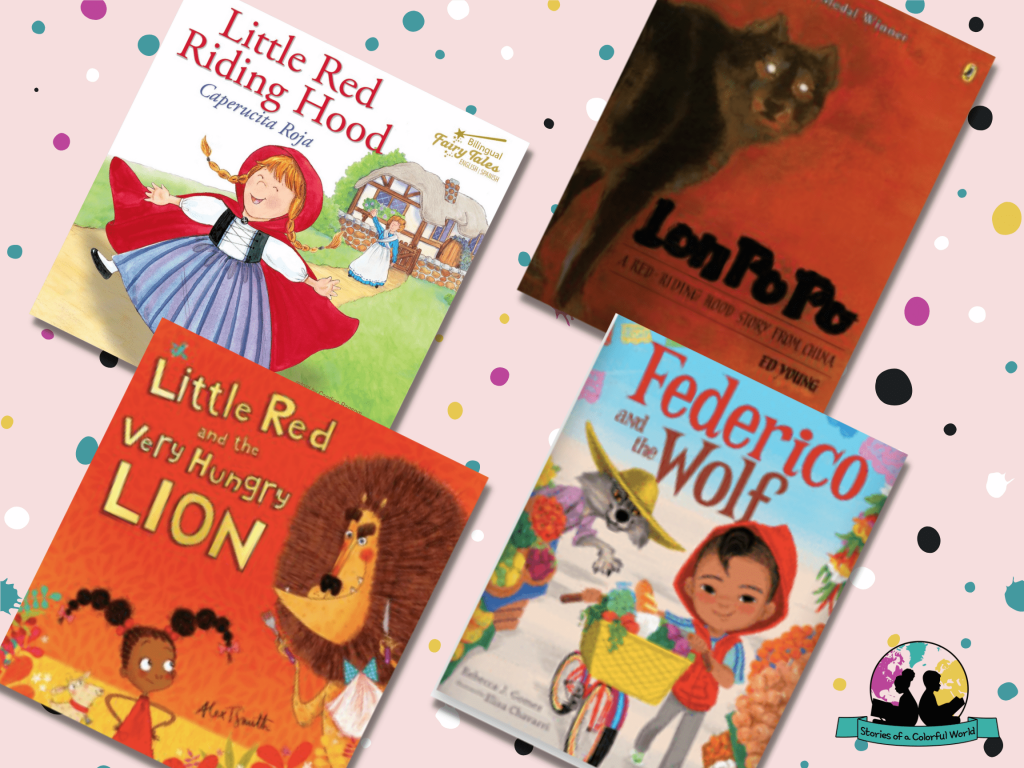 This Caldecott-winning Chinese retelling of “Little Red Riding Hood” is classic. This version features three young girls left home alone when their mother goes off to visit their grandmother for her birthday (I guess they weren’t invited🤷🏾‍♀️.). The cunning fox disguised as their PO PO tricks the girls into letting him into the house. Soon, the girls are onto the wolf’s tricks and develop a scheme to escape and punish this imposter. (Ages 4-8)

This adorable alternative retelling of the “Little Red Riding Hood” story is such a treat for young readers. In this version, Auntie Rosie comes down with a case of the spots, and the only thing that can help her is spot medicine, of course. As Little Red makes her way through the wild, she comes upon a lion that tries to pretend to be her auntie. While the lion thought his naughty plan to act like Auntie Rose was genius, it was no match for the brilliance of Little Red. He ends up with a makeover and a brand new attitude. This book is filled with humor, and while Little Red may appear small in size, she holds her own. (Ages 3-5)

Fedrico and the Wolf by Rebecca J. Gomez, Elisa Chavarri

In this version, a little boy named Federico is headed to his Abuelo’s house for lunch, but first, he must head to the store to buy the ingredients for his grandfather’s spicy pico. Donning his red hoodie, he dashes to the store and, on his way back, is stopped by none other than el Lobo. Luckily the wolf is no match for chili powder and habanero peppers. Love the gender switch and Spanish words sprinkled in. The illustrations are bold and bright and rhyming throughout. (Ages 4-7) 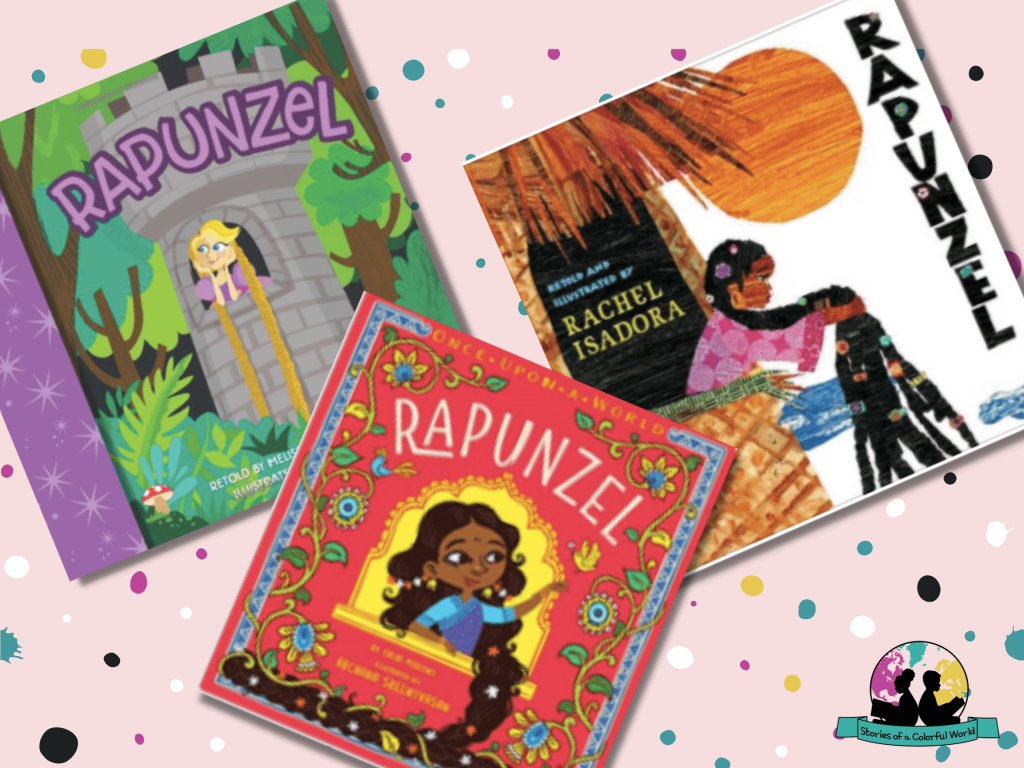 Once again, Rachel Isadora’s enchanting collage work takes a classic story to another level. Rapunzel is locked in a tower in Africa, and her dashing prince comes riding along on a zebra. Her locks are beautiful, beaded dreadlocks, and the twist at the end will not disappoint. (Ages 3-7)

This board book is part of the Once Upon a World series, a multicultural take on classic fairytales. It is a retelling of the Rapunzel story with touches of Indian culture sprinkled throughout-the characters, architecture, clothing, but not much more in terms of cultural references. The colors are vibrant and will captivate the intended the audience-babies and toddlers. (Ages 2-4) 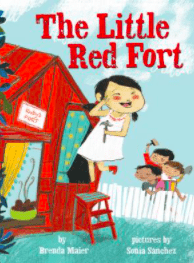 In an adaptation of “The Little Red Hen,” Ruby decides to make a fort. She asks her brothers Rodrigo, José, and Oscar Lee to help, but they’re all too busy. When she’s finished drawing the plans, gathering the materials, cutting the boards, and hammering the nails, they all want to come to join her in the fort. But, too little, too late. She’s going to enjoy it all by herself. (Ages 4-8) 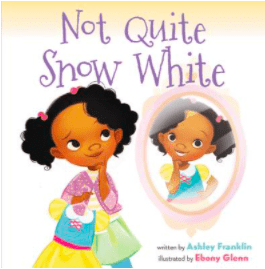 Not Quite Snow White by Ashley Franklin, Ebony Glenn

This is not a retelling of a classic tale but just another reminder of why we stress diversifying the images your child sees in books. Tameika was made for the stage. When she decided to try out to be Snow White in the school play, her classmates whispered that she was “too tall,” “too chubby,” and “too brown” to play the role. Will Tameika let their harsh words deter her because they don’t think she’s “quite right” for the role? Or will her determination prevail? (Ages 4-8)

With the end of the school year approaching, kids will be looking forward to those…

Fall Into a Good Book

Fall is in full swing and the temperatures are beginning to drop. Kids are getting…

Children's books are a fun and exciting way to teach children about food.  Whether it's…