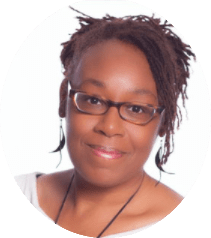 I recently had an opportunity to sit down with author Natasha Tarpley and have a discussion about her influences as a writer, thoughts around diversity in the children’s book industry, family literacy practices for parents, and much more.

Check out the highlights below, including some advice for parents and her current page-turners.

A lot of your books highlight African-American life and celebrates it in a way that doesn’t feel heavy-handed.  How much of yourself, others, or your own experiences do you bring into your books?

I think I bring a lot. For example, I Love My Hair was inspired by a game my mom used to play when she was combing my hair.  We would pretend there were people in my hair, and we would go around and make up stories and just really have fun with that process.  That direct connection isn’t in the book, but that whole idea of using your imagination and having fun and the mother and daughter connecting, that was definitely part of it.  I mentioned that I used to go to the barbershop to get my hair cut, and then sometimes my brother would cut my hair.  That was a way for us to connect, as well.  Just bringing that sense of caretaking and nurturing with black men, with each other, and with black women, I wanted to bring that into these works. I have a middle-grade novel called The Harlem Charade, and that was set in Harlem. That book is a celebration of Harlem, the history in that community, but also an acknowledgment and a question of who has the power to shape a community’s story, their future, what do we want to preserve from the past, and how do kids play a role in that. One of the things I would like to do throughout all of my work is to create spaces for kids not only to see themselves but also to activate their own imagination or connection with themselves and how they want to connect to the world in a way that is powerful and true to who they are.

We’re now seeing shifts, where the publishing industry is actually starting to acknowledge the inequity in diversity in books that are being published by the bigger publishing houses.  What are your thoughts on the importance of diverse representation in children’s books?

I am glad that all of the things that are happening are happening.  I was so excited to see the hashtag #publishingpaidme because it’s sort of been this quiet thing that a lot of us knew there was this disparity in how much authors were being paid.  And then creating the whole behind the scenes thing is good too, but we also have to figure out how just putting someone of color in a position doesn’t always change the narrative.  I don’t want to sound cynical, but sometimes the people that are selected are people who are doing good work, but they’re also occasionally comfortable with the mainstream narrative.  It’s good to have those people in those positions because I believe that they are going to bring about some diversity to those businesses and publishing houses. Still, I also want to get past this way of anointing one or two people and those handfuls of people are the ones given every award, so you end up not having diversity at all.  I’m sure they do good work, but I want us to get past putting these one or two people or publishing these one or two books and saying that is what diversity is.  I think fundamentally I want there to be an acknowledgment of our shared humanity.  I’m not espousing a ‘we are the world’ kind of thing but if you’re always looking at people in terms of “I need to do diversity” or “I need to talk about anti-racism” you never get to know them and get past those constraints that created the situation in the first place.

Do you have any advice for parents to act as advocates for getting books that reflect their children and their communities?

I think parents should use whatever platforms you have to connect with publishers.  If there’s a book that comes out, we’ve seen this many times where a book will come out that doesn’t reflect what we feel is an accurate depiction, and so people speak to that.  I would say, even on a daily basis, speak up and say, “I really like this book about x, y, and z that you published.  I’d like to see more of that”, or “These books are not representing my children or my home life. I would like to see more of these kinds of books.”  I think however you want to express that, writing to publishers,  writing op-eds, or purchasing.  Making it known that “I’m going to purchase this book because… or I’m not going to purchase this book because…” Maybe if we all do that on an individual basis, those things begin to compile, and we have more of a presence with publishers.  But, I think that’s a good place to start.

Did you have any literacy rituals or routines that you practiced as a child?

Both of my parents read to us. There are still stories my dad read that I remember.  We were always very interactive with the story.  The stories that I remember my dad reading, he would do little sound effects and things like that.

I was a kid that loved books about food.  So if I was reading something with like a peasant stew, or crust of bread, I would always want to go out and taste those things.  Those are ways to extend the story.  We had a Little House on the Prairie cookbook.  In the book, they were making snow candy.  So, without our parents’ knowledge, we were trying to do this too.  But you know, snow in the city of Chicago is not the snow you want to eat and make snow candy.

A lot of teachers also use,  for example, The Harlem Charade.  It has references to real places in New York. Even though we might not be able to go to those places, there’s still a lot of virtual stuff that you can do, like extending the stories that you’re reading virtually and doing some projects around that or something similar in your own neighborhoods.

We also did a lot of hands-on things, not always centered around books. Something that sparked imagination and curiosity overall, so I think those are really important qualities to cultivate in kids beyond just reading. To have that desire to explore the world, and explore what’s going on, I think those are essential qualities for both readers and writers.

What are you currently reading?

I’m actually reading Harry Potter right now.  It’s partly research, and partly, I’ve never really finished the series.  There are definitely issues in that series and I guess J.K. Rowling has had some things come out.  I wish there were more representation of kids of color, but it is a really immersive story, and that is what I’m taking away and appreciating about it.  It’s a really good read during this time, just escaping into a world.  Rowling is really good at building that world.

Do you have projects in the works or anything new coming out?

I have a picture book coming out in 2021, which is going to be illustrated by Creative Soul Photography.  They’re a husband and wife team that are known for doing these beautiful and elaborate portraits of Black children.  It’s sort of allowed me to go back.  I wrote poetry very early in my career, so it’s a very poetic manuscript about celebrating who you are.

I’m also writing a podcast called Opal Watson Private Eye.  It features a girl that is visually impaired in Chicago, and she has her own detective agency.  The first season of that has already been released on Pinna, an audio subscription-based platform for kids.  I’m just starting work on the second season.  That’s been fun to do a scripted series and build some skills in another genre.

How can people stay connected with you on social media or your website?

Natasha Tarpley is the author of the best-selling picture book, I Love My Hair!, as well as other acclaimed titles for children and adults. She is the recipient of a National Endowment for the Arts Fellowship, among other awards. When she is not writing books, Ms. Tarpley can usually be found reading them. She has also taken up the cruel and unusual hobby of running marathons. Ms. Tarpley is the co-founder of Voonderbar! Media, a multicultural children’s book media company. She lives with her husband and the ghosts of two cats on the south side of Chicago.

If I Ran For President

A Special Note to Young Readers:  Have you ever thought about being a future leader? …

Inclusivity in the publishing industry is not standard practice. Especially for children’s books, failure to…

Encouraging Empathy and Generosity through “Those Shoes”

During times like these, many of us are looking for ways to raise children that…