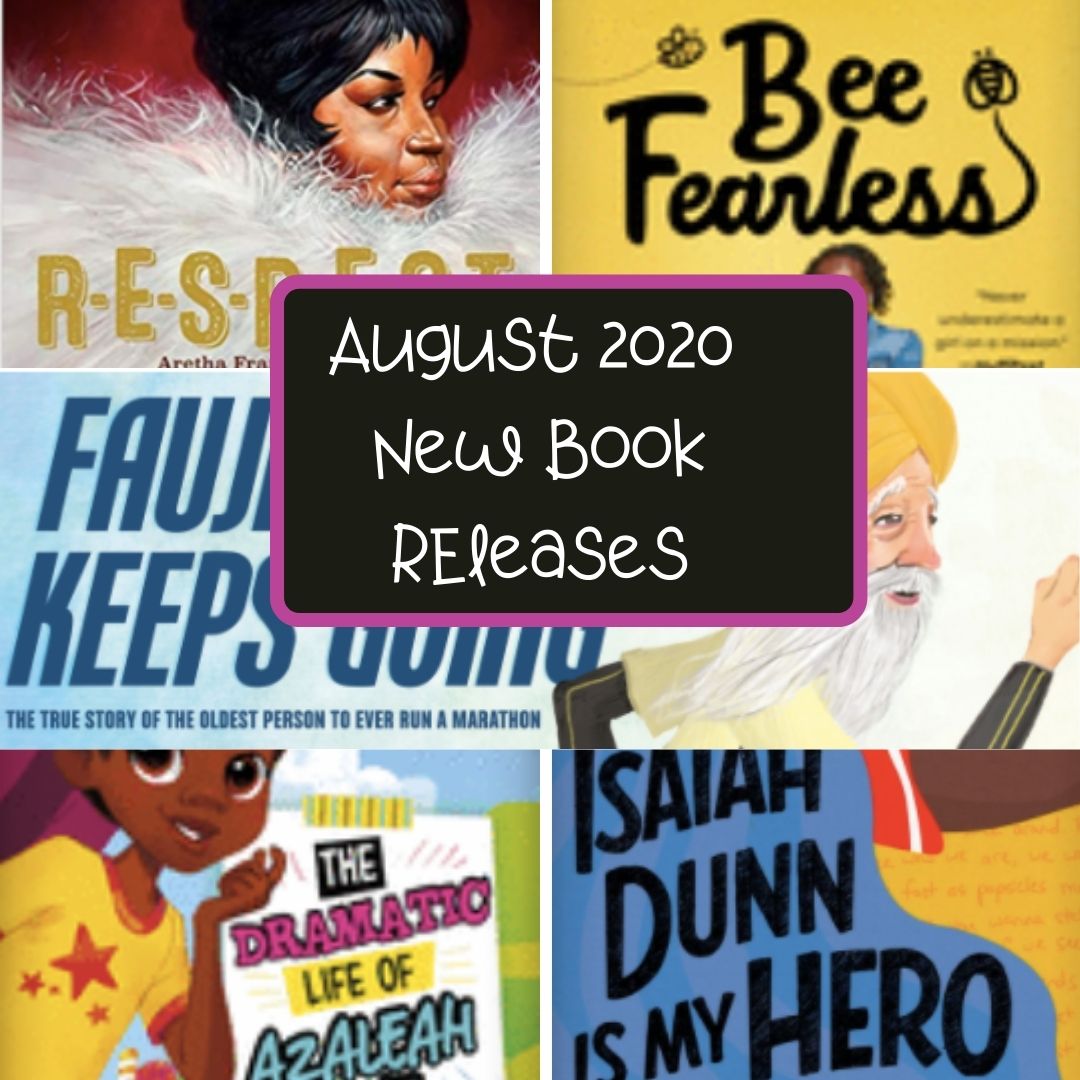 August always reminds us that summer days are going to grow shorter and school is on the horizon.  As we prepare for the start of the school year,  we’ve collected a few diverse books releasing this month that can help to renew your child’s reading habits. 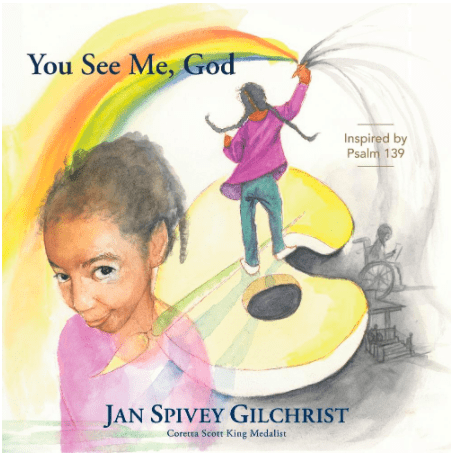 Multiple award-winner Jan Spivey Gilchrist draws on her own childhood struggles as she creatively weaves images around this paraphrase of the powerful verses from Psalm 139. As children grow and start to notice differences among themselves, they can often feel excluded or alone. But the truth is . . . God created each one of us in His unique way and He has a purpose and a plan for each of us.

You See Me, God is a beautifully illustrated children’s book based on Jan’s understanding of how God sees her—and all of us—since before birth. The flowing poetry describes the beauty of Psalm 139 in a way children will understand, and the colorful, detailed illustrations will capture their imaginations, further bringing this important message to their young hearts. 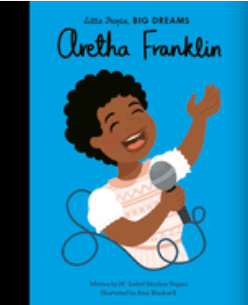 The fourth of five children, Aretha was born in Tennessee and took the stage at an early age in her father’s church choir. She went on to become the best-selling rhythm and blues singer of all time, and the first woman to be installed in the Rock and Roll Hall of Fame. This moving book features stylish and quirky illustrations and extra facts at the back, including a biographical timeline with historical photos and a detailed profile of the broadcaster’s life.
Corazon Aquino (Little People, Big Dreams) by Maria Isabel Sanchez Vegara, Ginnie Hsu (Ages 4-7)  Release date: August 4 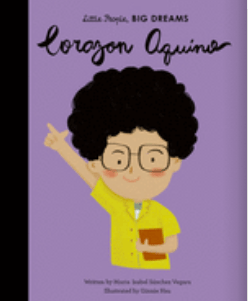 Little Cory was a shy, studious child with a great sense of justice. As a young woman and wife, she and her family felt compelled to speak out against the unjust leader who was ruining their country. Showing bravery, reliability, and honesty, she led the revolution that ended the dictator’s rule and went on to become the president of the Philippines.
RESPECT: Aretha Franklin, Queen of Soul by Carole Boston Weatherford, Frank Morrison (Ages 4 – 8)   Release date: August 25 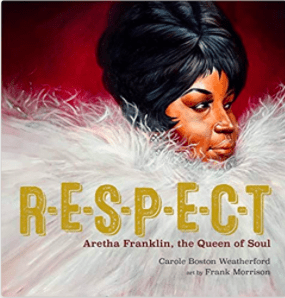 Aretha Franklin was born to sing. The daughter of a pastor and a gospel singer, her musical talent was clear from the earliest days in her father’s Detroit church where her soaring voice spanned more than three octaves. Her string of hit songs earned her the title “the Queen of Soul,” multiple Grammy Awards, and a place in the Rock & Roll Hall of Fame. But Aretha didn’t just raise her voice in song, she also spoke out against injustice and fought for civil rights.
Fauja Singh Keeps Going: The True Story of the Oldest Person to Ever Run a Marathon by Simran Jeet Singh, Baljinder Kaur (Ages 4 – 8) Release date: August 25 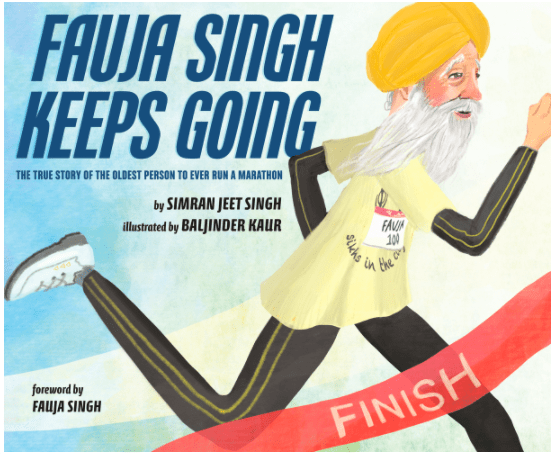 Every step forward is a victory.
Fauja Singh was born determined. He was also born with legs that wouldn’t allow him to play cricket with his friends or carry him to school miles from his village in Punjab. But that didn’t stop him.
Working on his family’s farm, Fauja grew stronger to meet his own full potential. He never stopped striving. At the age of 81, after a lifetime of making his body, mind, and heart stronger, Fauja decided to run his first marathon. He went on to break records all around the world and became the first person over 100 to complete the grueling long-distance race.
The true story of Fauja Singh reminds us that it’s both where we start and how we finish that make our journeys unforgettable.
Dark Was the Night: Blind Willie Johnson’s Journey to the Stars by Gary Golio, E.B. Lewis (Ages 5 – 8)  Release date: August 25 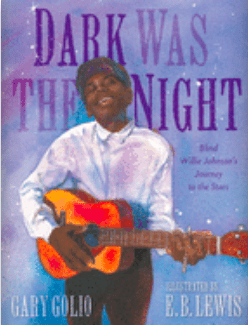 Willie Johnson was born in 1897, and from the beginning, he loved to sing–and play his cigar box guitar. But his childhood was interrupted when he lost his mother and his sight. How does a blind boy make his way in the world? Fortunately for Willie, the music saved him and brought him back into the light. His powerful voice, combined with the wailing of his slide guitar, moved people. Willie made a name for himself performing on street corners all over Texas. And one day he hit it big when he got a record deal and his songs were played on the radio. Then in 1977, his song–“Dark Was the Night”–was chosen to light up the darkness when it was launched into space on the Voyager I space probe’s famous Golden Record. His immortal song was selected for the way it expresses the loneliness humans all feel while reminding us we’re not alone.
The Dramatic Life of Azaleah Lane by Nikki Shannon Smith, Gloria Felix (Ages 6 – 8)  Release date: August 1 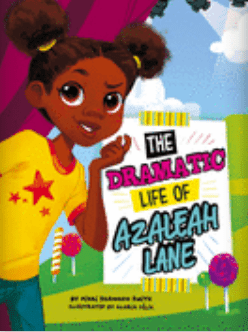 Azaleah’s big sister, Nia, has been cast as Willa Wonka in the school musical, and the entire Lane family is looking forward to the show. Azaleah has even helped plan a surprise dinner party for Nia at Avec Amour, Mama’s restaurant. But then the real drama starts. At the first rehearsal, all sorts of things go wrong: missing batteries, sets falling over, props misplaced . . . It’s so many things, in fact, that Azaleah suspects “foul play.” And when the special effects on Nia’s costume don’t work at dress rehearsal, Nia is a nervous wreck. To top it all off, the high school journalism class is covering the performance for the school blog, and the director doesn’t have time to replace Nia’s costume. Nia has to wear it without the special effects. Azaleah becomes determined to make sure the musical isn’t ruined for Nia. Azaleah has to get to the bottom of the mysterious rehearsal troubles and finish party preparations before the curtain goes up.
Tyaja Uses the THiNK Test by Linda Ryden, Shearry Malone  (Ages 6 – 8 )  Release date: August 13 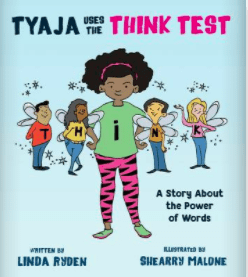 Mrs. Snowden tells the kids that T = True, H = Helpful, N = Necessary, and K = Kind. If what you’re about to say isn’t any of these things, she tells them, you shouldn’t say it. Later that day, when Tyaja is about to criticize her friend Dhavi’s new haircut, she is stopped by four little elves sporting the letters T, H, N, and K, who reinforce Ms. Snowden’s lesson and remind Tyaja how friends should treat friends. Tyaja learns that she is the “I” in THiNK!
Isaiah Dunn is My Hero by Kelly J. Baptist  (Ages 8 – 10)  Release date: August 18 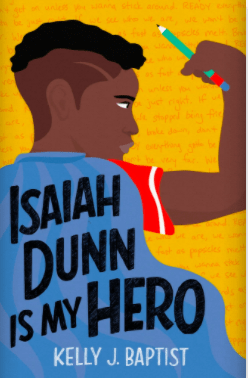 Isaiah is now the big man of the house. But it’s a lot harder than his dad made it look. His little sister, Charlie, asks too many questions, and Mama’s gone totally silent.  Good thing Isaiah can count on his best friend, Sneaky, who always has a scheme for getting around the rules. Plus, his classmate Angel has a few good ideas of her own–once she stops hassling Isaiah.
And when things get really tough, there’s Daddy’s journal, filled with stories about the amazing Isaiah Dunn, a superhero who gets his powers from beans and rice. Isaiah wishes his dad’s tales were real. He could use those powers right about nowKelly J. Baptist’s debut novel explores the indomitable spirit of a ten-year-old boy and the superhero strength it takes to grow up.

The Magic in Changing Your Stars by Leah Henderson (Ages 8-12) Release date: August 4 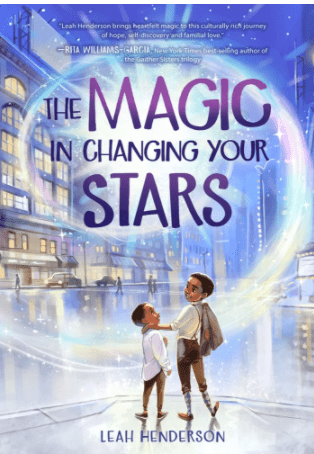 Eleven-year-old Ailey Benjamin Lane can dance—so he’s certain that he’ll land the role of the Scarecrow in his school’s production of The Wiz. Unfortunately, a talented classmate and a serious attack of nerves derail his audition: he just stands there, frozen. Deflated and defeated, Ailey confides in his Grampa that he’s ready to quit. But Grampa believes in Ailey, and, to encourage him, shares a childhood story.

Finish the Fight: The Brave and Revolutionary Women Who Fought for the Right to Vote by Veronica Chambers (Ages 8 – 12)  Release date: August 18 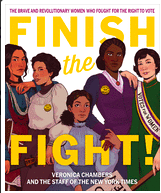 Who was at the forefront of women’s right to vote? We know a few famous names, like Susan B. Anthony and Elizabeth Cady Stanton, but what about so many others from diverse backgrounds—black, Asian, Latinx, Native American, and more—who helped lead the fight for suffrage? On the hundredth anniversary of the historic win for women’s rights, it’s time to celebrate the names and stories of the women whose stories have yet to be told 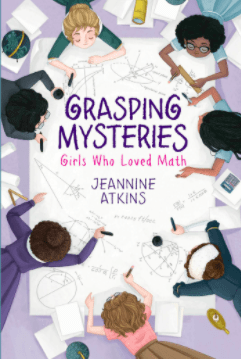 After a childhood spent looking up at the stars, Caroline Herschel was the first woman to discover a comet and to earn a salary for scientific research. Florence Nightingale was a trailblazing nurse whose work reformed hospitals and one of the founders of the field of medical statistics. The first female electrical engineer, Hertha Marks Ayrton registered twenty-six patents for her inventions.Marie Tharp helped create the first map of the entire ocean floor, which helped scientists understand our subaquatic world and suggested how the continents shifted. A mathematical prodigy, Katherine Johnson calculated trajectories and launch windows for many NASA projects including the Apollo 11 mission. Edna Lee Paisano, a citizen of the Nez Perce Nation, was the first Native American to work full time for the Census Bureau, overseeing a large increase in American Indian and Alaskan Native representation. And Vera Rubin studied more than two hundred galaxies and found the first strong evidence for dark matter.Told in vibrant, evocative poems, this stunning novel celebrates seven remarkable women who used math as their key to exploring the mysteries of the universe and grew up to do innovative work that changed the world. 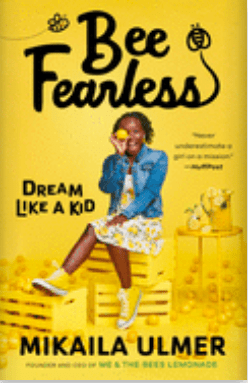 When Mikaila Ulmer was four, she was stung by a bee–twice in one week. She was terrified of going outside, so her parents encouraged her to learn more about bees so she wouldn’t be afraid. It worked. Mikaila didn’t just learn what an important role bees play in our ecosystem, but she also learned bees are endangered and set out to save them. She started by selling cups of lemonade in front of her house and donating the small proceeds to organizations dedicated to bee conservation. When she realized the more lemonade she sold, the more bees she could help, Me & the Bees Lemonade was born. Now she sells her lemonade across the country. From meetings with Fortune 500 CEOs to securing a deal on Shark Tank, to even visiting the Obama White House, Mikaila’s lemonade and passion for bee conservation have taken her far.

In Bee Fearless, part memoir, part business guide, Mikaila–now fifteen–shares her personal journey and special brand of mindful entrepreneurship and offers helpful tips and guidance for young readers interested in pursuing their own ventures, instilling in them the bee-lief that they can bee fearless and achieve their dreams too.

What books are you and your child looking forward to reading this August?

Stand Up and Show Out:18 Children’s Books about the Fight for Equality

As parents, we take the job of protecting our children very seriously.  We wish we…

Wondering what to fill your young readers' shelves with this fall?  As kids head back…

With our election season, over (sorta, kinda?) and the holidays quickly approaching, what better time…