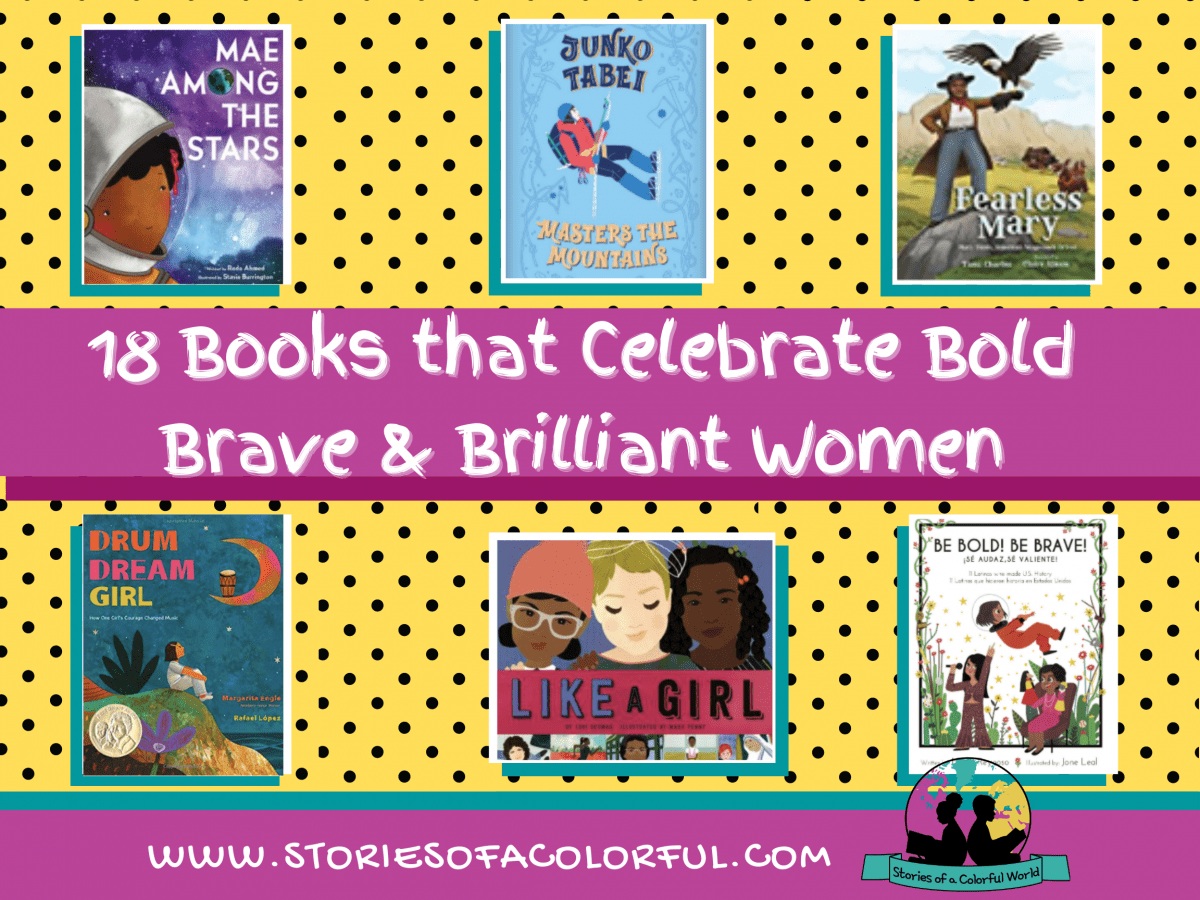 March is Women’s History Month, a great time to celebrate the accomplishments of women and set a path to inspire a new generation of young women.

Not that there’s ever a wrong time to teach kids about bold, brave, and brilliant women, the challenge comes in narrowing down our list.  We’ve chosen 18 books that feature well-known women that have changed the world, in addition to ones that you might not be as familiar with.  These women are sure to inspire a new generation of women leaders (and men, too!) 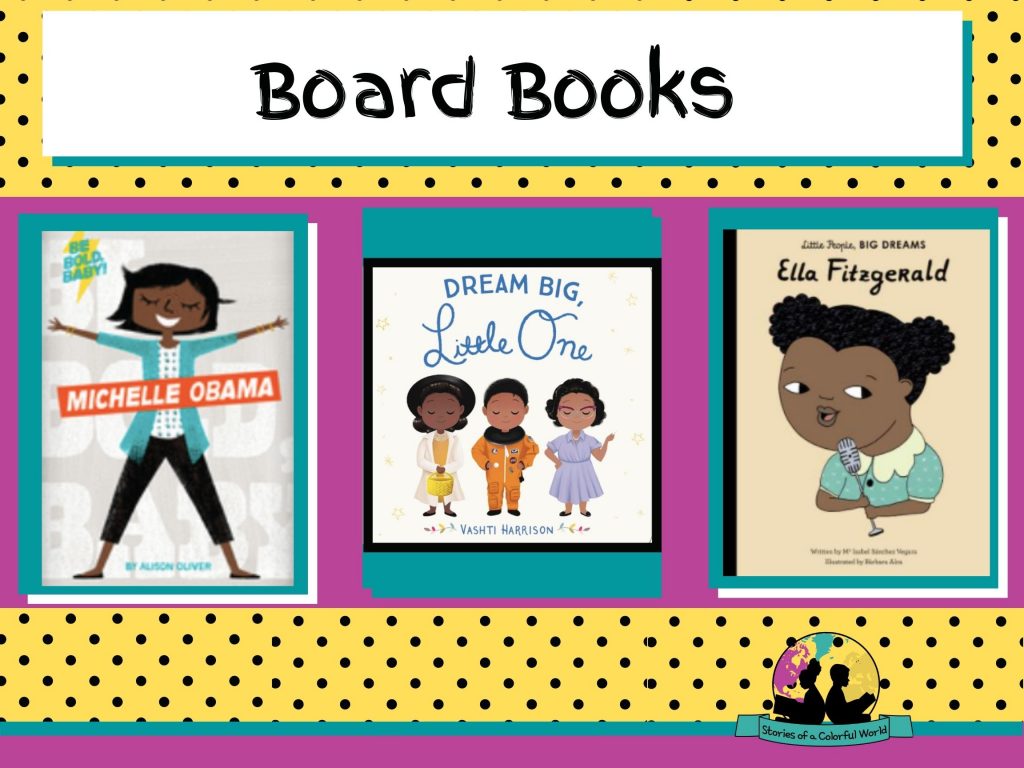 Be Bold Baby: Michelle Obama by Allison Oliver (Ages 0-3): This board book shows different moments and quotes throughout Michelle Obama’s life, inspiring even our youngest leaders to be great.

Dream Big, Little One by Vashti Harrison (Ages 0-3): “Dream big, little one/ There’s so much you can do” This is like a calling cry to all of our little ones.  From Mae Jemison to Julie Dash, this board book features 18 dynamic women that made their mark on the world. 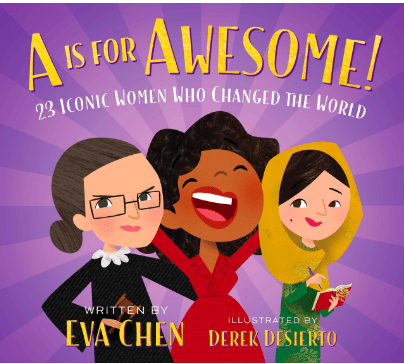 A is for Awesome!: 23 Iconic Women Who Changed the World by Eva Chen, Derick Desierto (Ages 1-3):  In this story, Juno introduces readers to inspiring women from A-Z. 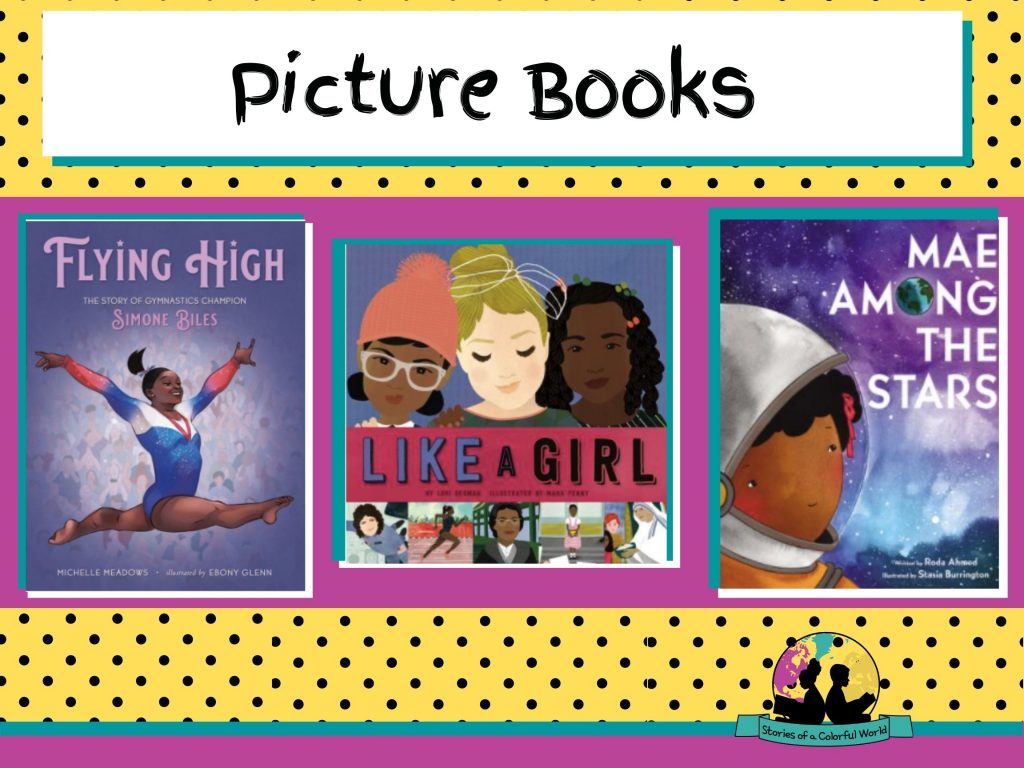 Flying High: The Story of Gymnastics Champion Simone Biles by Michelle Meadows, Ebony Glenn (Ages 4-8): Simone Biles was flipping off couches and bouncing off walls at a very young age. When Simone turned six, she was adopted by her grandparents and introduced to the world of gymnastics. Through hard work and drive, Simone climbed the ranks and became an Olympic champion. ⠀

Like A Girl by Lori Degman, Mara Penny (Ages 4-8):  This book changes the meaning of doing something “like a girl.”  Prevail, stand up, create and soar just like Maya Angelou, Frida Khalo, Wangari Maathai, and many other influential women.

Fearless Mary: Mary Fields, American Stagecoach Driver by Tami Charles, Claire Almon (Ages 5-8):  When Mary Fields saw the “help wanted” posters looking for stagecoach drivers, she was not deterred.  Mary knew that a stagecoach driver needed to be smart, tough, and unshakeable because of all the dangers awaiting you along the trail. As a formerly enslaved woman that traveled west on her own for new opportunities, she knew she was up for the job.  Undaunted by others’ opinions, she became the first woman stagecoach driver and one of the greatest, making way for women postal workers today.

Mae Among the Stars by Roda Ahmed, Stasia Burrington (Ages 4-8): Mae Jemison was a dreamer.  She dreamed of seeing the Earth from beyond the stars.  With her parents’ encouraging words, “if you dream it, believe in it, and work hard for it, anything is possible,” she kept learning and working until her dreams came true. 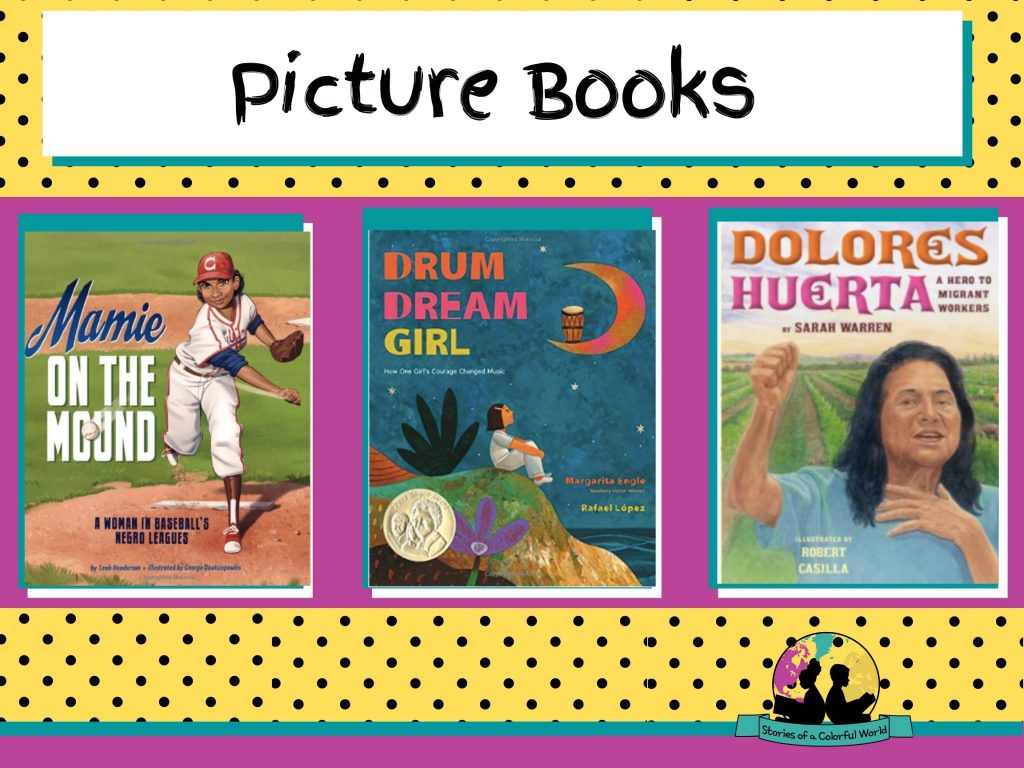 Mamie on the Mound: A Woman in Baseball’s Negro League by Leah Henderson, George Doutsiopoulos (Ages 8-12):  At 5 feet 4 inches tall, Mamie “Peanut” Johnson was a force to be reckoned with.  At six-years-old, her uncle Leo taught her how to play baseball.  As she grew older, the better she got, the more she realized she really wanted to play.  Mamie’s race and gender were secret weapons because everyone always underestimated her.  But when she finally got her chance to go pro, would she be up for the challenge?

Drum Dream Girl: How One Girl’s Courage Changed Music by Margarita Engle, Rafael López (Ages 4-7): Inspired by the childhood of Millo Castro Zaldarriaga, a Chinese-African-Cuban girl who was told that only boys should play drums.  She dreamed in drumbeats, and rhythms rippled through her pulsing hands.  Although her father initially hindered her efforts, he eventually gave in and found her a teacher that brought out her natural talent.  Millo eventually became a world-famous musician playing alongside many of the jazz greats.

Delores Huerta: A Hero to Migrant Workers by Sarah Warren, Robert Casilla (Ages 6-9):  As a teacher, Delores Huerta was concerned about her students.  They came to school hungry, sick, and without shoes. She realizes that their families aren’t being paid well and working in deplorable conditions.  Delores organized a strike and helped the farm works stand up for their rights. 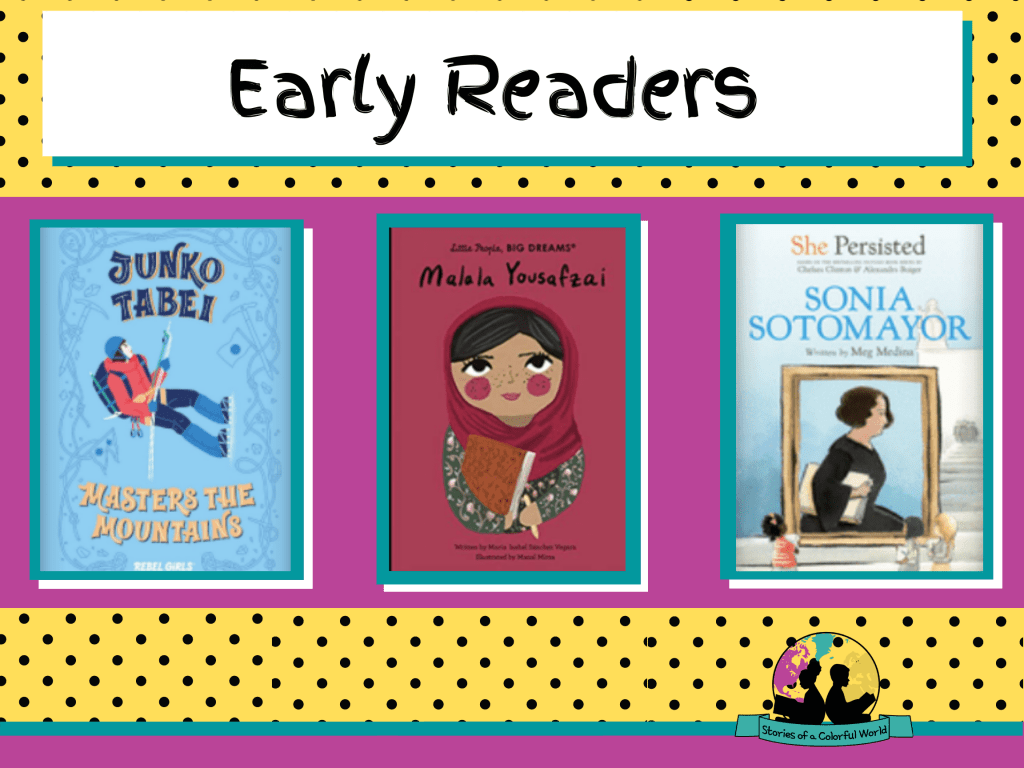 Junko Tabei Masters the Mountain by Rebel Girls, Montse Galbany (Ages 6-9):  Junko wasn’t exactly what you would call athletic, but when Mr. Watanabe, her fourth-grade teacher, took the class on a trip to a mountain, something magical happened.  She knew that if he believed that she could hike to the top of the mountain, then she could do it.  Junko was determined to master the mountain by climbing all kinds of mountains and building a community with other climbers.  Junko became the first woman to climb Mount Everest.

Little People, Big Dreams: Malala Yousafzai by Maria Isabel Sanchez Vegara, Minal Merza (Ages 4-7): Little People, Big Dreams explores the life of Malala Yousafzai.  When Malala was born, her father vowed to give her every opportunity a boy would have.  When the Taliban took over her village, they prohibited girls from getting an education.  Malala spoke out and was shot by those who wanted to silence her.  She recovered and continues to speak out about the importance of educating girls.

She Persisted: Sonia Sotomayor by Meg Medina, Alexandra Boiger(Ages 6-9):  In this early reader, learn the story of how Sonia Sotomayor persisted throughout her life and became the first Latina Supreme  Court Justice. 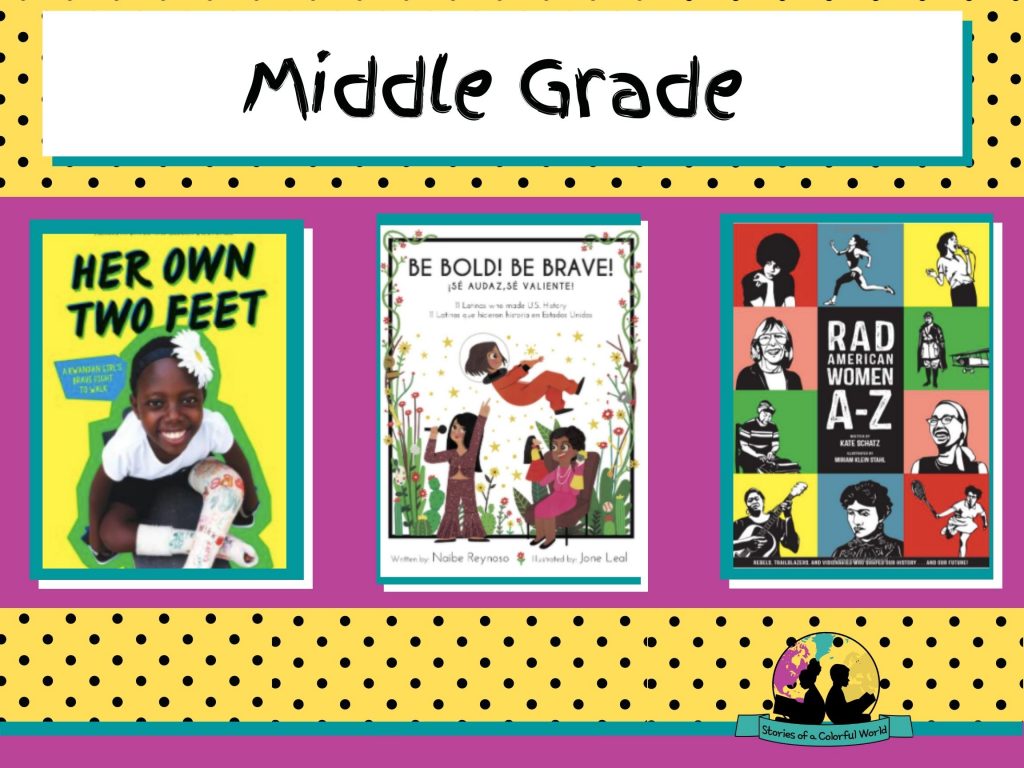 Her Own Two Feet: Rwandan Girl’s Brave Fight to Walk by Meredith Davis Rebekah Uwitonze (Ages 8-12): Born in a small village in Rwanda with one brother and many sisters, Rebekah Uwitonze had to crawl or be carried because of her curled and twisted feet.  As she got older, it became nearly impossible for her to get around until a doctor in the U.S.  offered to change her life.  Faced with the challenges of traveling to the U.S. on her own, not speaking the language, and dozens of surgeries, Rebekah was determined to stand on her own two feet. 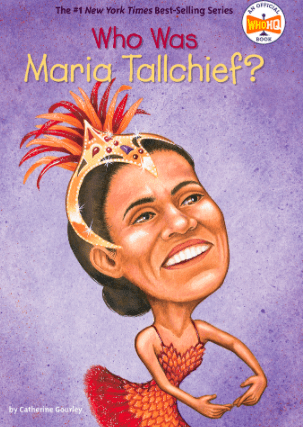 Who Was Maria Tallchief? by Catherine Gourley, Val Paul Taylor (Ages 8-12): Born on the Osage reservation in Oklahoma. This biography tells not only the journey of Maria Tallchief in becoming America’s first prima ballerina but gives a brief history of the Osage people.

Be Bold! Be Brave!: 11 Latinas that made U.S. History by Naibe Reynoso, Jone Leal (Ages 8-12): Written in both English and Spanish, this book presents 11 Latinas that have made U.S. history. From actresses to astronauts to activists and even a puppeteer, these women have blazed trails in their respective fields.

Rad American Women A-Z: Rebels, Trailblazers, and Visionaries Who Shaped Our History…and Our Future by Kate Schatz, Miriam Klein Stall (Ages 8-16):  From Angela Davis to Zora Neale Hurston, this book is jam-packed with she-roes across many different walks of life.  These 26 female role models inspire, encourage, and persist in the face of challenge.

What are some of your favorite books about inspiring women?  Leave a comment below.

The reality that summer is half-way over, is not something that I'm ready to face…

You and your little one(s) can grab a seat in your favorite reading spot, tuck…

We are so excited about some of the books that are coming out in May.…